“Lost” London by the Sea

Even the most ardent Londonphile  needs to get away from the City occasionally and the recent sunshine encouraged me to go the south coast.

After the joys of Bournemouth and Poole it was time to visit Swanage  on the Isle of Purbeck.

Swanage as a typical seaside resort is probably the last place you would consider to have connections with London but walking around the town leads to number of discoveries that reminds us of a connection with Swanage  and Victorian London.

In the Victorian period. John Mowlem a  resident of Swanage, became a successful builder in London, creating the Mowlem construction company.

He made his fortune in London by importing stone into the city  including Purbeck limestone.

Mowlem and his nephew George Burt began to buy  relics and monuments in London and sent them back  to Swanage often using the stones as ballast for the empty vessels returning from London.

One of the largest monuments was a  big clock tower . This  clock tower was built to commemorate the Duke of Wellington, as a newspaper at the time remarked it was to be important London landmark.

A new clock, placed on a high tower, is to form a prominent feature of the south side of London Bridge. Out of that spirit of idolatry of which the people do not seem to tire, this clock is to bear the name of Wellington. It will scatter light over the large space occupied by the entrance to the great railway lines which have their common station at London Bridge and will be seen at night a beautiful and conspicuous object, like the lighted turrets of the Panopticon, from many parts of London. The tower will be seventy feet high and forty feet broad at the base ; and the clock, having four illuminated faces, will turn one of its discs to each quarter of the metropolis.

it was designed by Arthur Ashpital and built-in 1854 at the southern approach to the old London Bridge. However within 10 years it was considered an obstruction to traffic  and had to be removed. It was re-erected 1867-68 on its present site at the end of the bay. 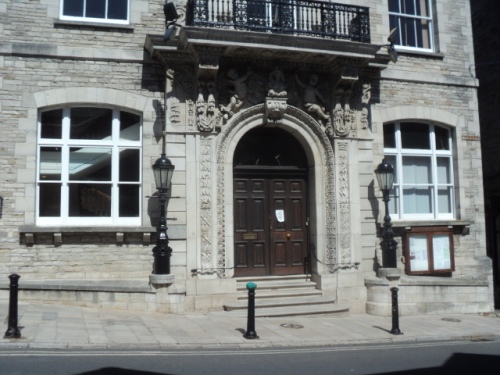 The Mercers Hall façade on the Town Hall

Another extraordinary item transferred to Swanage was the façade of the Mercers’ Hall from Cheapside in the City of London, the façade originally built-in 1676  is used as part of the Swanage Town Hall. 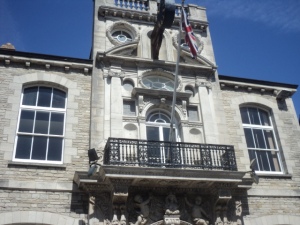 Other items used in a local building, Purbeck House were marble chippings from Albert Memorial, an archway from Hyde Park Corner and floor tiles from the Palace of Westminster. 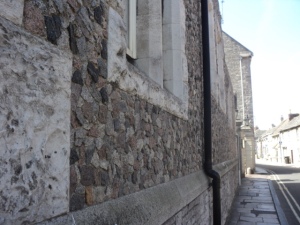 Perhaps the most bizarre items is to find City of London Bollards behind the Town Hall. 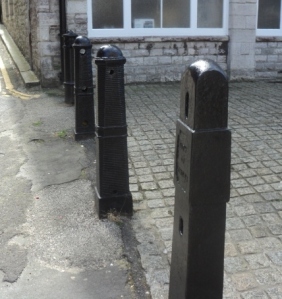