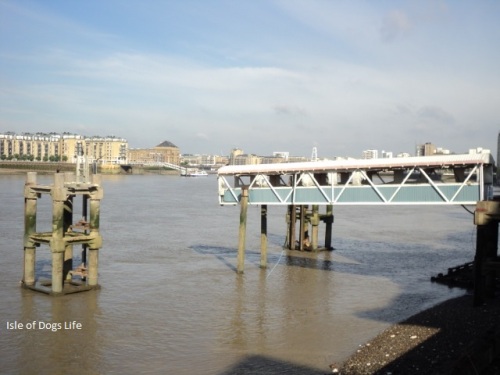 The river front on  the Isle of Dogs has been transformed in the last 20 years especially in the Westferry Circus area. This is also the area of the Canary Wharf pier where you can catch the Thames Clippers into London or Greenwich.

This pier was developed at the same time that Canary Wharf was developed, however a few hundred yards down the river is another pier that has a far longer and more interesting history.

Although standing derelict for over the last 20 years, a West India Dock Pier has stood on this site since the 1870s. The original pier was built-in 1874–5 to allow access for merchants to the East and West India Dock Company’s new wool warehouses at the South Dock of the West India Docks.

It was also used for a purpose it was not intended for, as a newspaper in 1892 reported.

In the course of the hearing of a charge against a man named Hazel of having attempted to commit suicide by jumping into the river, it was stated the other day, at the Thames Police Court, that the accused was rescued by Mr. Sibley Kitchener, pier master at the West India Dock Pier, and that in sixteen years Mr. Kitchener had saved forty seven lives.

In 1905 it was of 17 piers taken over by the LCC for its Penny Steamer Service, this one of the first attempts to provide a comprehensive transport service on the river. Opening in 1905 it proved to be less than successful and closed its service in 1908.

After the service closed the pier was mainly used by private steamboat operators before being transferred to the new Port of London Authority (PLA) in 1909.

Although in use up to the Second World War,  the pier was destroyed from German bombing in 1941.

The pier was rebuilt in 1949–50, using the pontoon from the redundant Brunswick Pier at Blackwall. A steel pontoon was supplied by the Bay Wharf Construction Company, the restoration of the dolphins and fixed brow of the pier being carried out by John Mowlem Company.

I have for a long time looked for the Dolphins thinking they may be carvings of aquatic creatures before I found out that a dolphin is a man-made marine structure that extends above the water level and is not connected to shore. 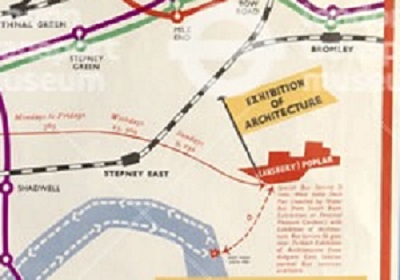 It was with the 1951 Festival of Britain that the pier gained a new use, although the Festival was mainly based on the South Bank there was considerable interest in the new Lansbury Housing estate in Poplar. Therefore it was decided to run special River Buses between the South Bank and the Isle of Dogs where special buses were laid on to take visitors into Poplar.

After the Festival there was an attempt to develop a permanent Riverbus  service but like its predecessors the service was not profitable and collapsed. Part of the reason it was not popular may have been for some people the riverfront was less than inspiring, as a visitor  in 1952 remarked.

The view is even more drab at the West India Dock Pier. Icy shafts of air curl up from the river. The blasts from the tug boats mingle with the lapping of the Thames (pure pea soup here). Across the river are the rusty wharves and the sooty buildings, but in contrast the streets have sunny names like Malabar, Cuba and Manilla.

Although it was used by Docklands River Bus service in 1987–91, as soon as the Canary Wharf Pier was built , the pier was neglected and gradually become derelict. 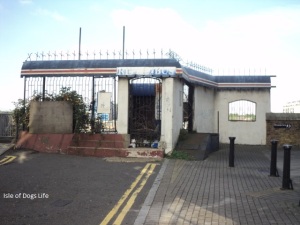 It is however still popular with the wildlife with the dolphins providing a place for cormorants to survey the river and gulls congregate on the top of the old walkway. However it is the river that is providing the greatest threat battering the walkway at high tide, causing it to  collapse recently. 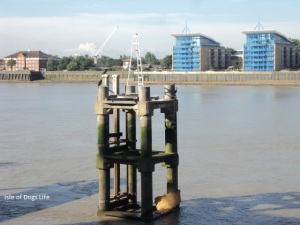 It is true to say that the West India Docks Pier is a bit of an eyesore now, but it remains an interesting relic of Isle of Dogs history.

By isleofdogslife in River Life on September 10, 2013.
← HMS Northumberland in West India Dock Davers Folly and the Folly House Tavern →