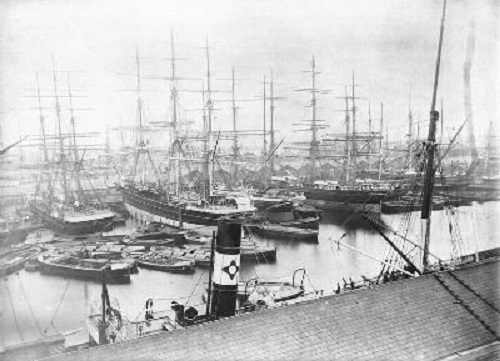 At the beginning of the 20th Century, Joseph Conrad wrote a series of essays under the title of the Mirror of the Sea about the various aspects of a nautical life. Conrad had for nearly 20 years worked on a variety of ships starting as a steward before working his way up to the rank of Captain. He had left Poland when he was 17 and then worked on French ships for four years before transferring to the British merchant fleet.

In 1894, Conrad he gave up the nautical life to pursue a career as a writer. Although it took a long time to gain success, many of his stories often with a maritime theme are now considered classics especially Heart of Darkness.

In the following piece, Conrad remembers the great days of the Clippers that used to be moored in the South Dock of the West India Docks.

To a man who has never seen the extraordinary nobility, strength, and grace that the devoted generations of ship-builders have evolved from some pure nooks of their simple souls, the sight that could be seen five-and-twenty years ago of a large fleet of clippers moored along the north side of the New South Dock was an inspiring spectacle.  Then there was a quarter of a mile of them, from the iron dockyard-gates guarded by policemen, in a long, forest-like perspective of masts, moored two and two to many stout wooden jetties.  Their spars dwarfed with their loftiness the corrugated-iron sheds, their jibbooms extended far over the shore, their white-and-gold figure-heads, almost dazzling in their purity, overhung the straight, long quay above the mud and dirt of the wharfside, with the busy figures of groups and single men moving to and fro, restless and grimy under their soaring immobility. 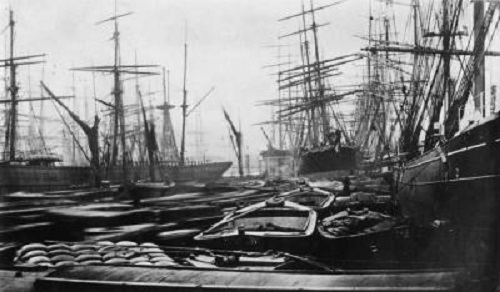 At tide-time you would see one of the loaded ships with battened-down hatches drop out of the ranks and float in the clear space of the dock, held by lines dark and slender, like the first threads of a spider’s web, extending from her bows and her quarters to the mooring-posts on shore.  There, graceful and still, like a bird ready to spread its wings, she waited till, at the opening of the gates, a tug or two would hurry in noisily, hovering round her with an air of fuss and solicitude, and take her out into the river, tending, shepherding her through open bridges, through dam-like gates between the flat pier-heads, with a bit of green lawn surrounded by gravel and a white signal-mast with yard and gaff, flying a couple of dingy blue, red, or white flags.

In the New South Dock there was certainly no time for remorse, introspection, repentance, or any phenomena of inner life either for the captive ships or for their officers.  From six in the morning till six at night the hard labour of the prison-house, which rewards the valiance of ships that win the harbour went on steadily, great slings of general cargo swinging over the rail, to drop plumb into the hatchways at the sign of the gangway-tender’s hand.  The New South Dock was especially a loading dock for the Colonies in those great (and last) days of smart wool-clippers, good to look at and—well—exciting to handle.  Some of them were more fair to see than the others; many were (to put it mildly) somewhat over-masted; all were expected to make good passages; and of all that line of ships, whose rigging made a thick, enormous network against the sky, whose brasses flashed almost as far as the eye of the policeman at the gates could reach, there was hardly one that knew of any other port amongst all the ports on the wide earth but London and Sydney, or London and Melbourne, or London and Adelaide, perhaps with Hobart Town added for those of smaller tonnage.  One could almost have believed, as her grey-whiskered second mate used to say of the old Duke of S-, that they knew the road to the Antipodes better than their own skippers, who, year in, year out, took them from London—the place of captivity—to some Australian port where, twenty-five years ago, though moored well and tight enough to the wooden wharves, they felt themselves no captives, but honoured guests.

One of the most famous of the Wool Clippers was the Cutty Sark who regularly made the London to Australia trip often starting off from the West India Docks, it is somewhat ironic that a ship known for its speed in the water would end up ” captive” in dry dock in nearby Greenwich.

In October, the hulk of one of the oldest clippers The City of Adelaide will towed to Greenwich for a few days before being transported to Australia to be totally renovated.