Reach for the Sky – A Short History of Canary Wharf

If you walk amongst the shiny skyscrapers of Canary Wharf today, you may find it hard to believe that only thirty years ago this was the derelict site of the once great West India Docks.

However although the cranes of the construction sites have taken over from the cranes in the docks, the transformation into Canary Wharf was not without its problems and setbacks.

The creation of an enterprise zone in the Isle of Dogs in the 1980s may have made the area attractive for potential investors, however finding the Investment to finance one of the largest schemes in the UK proved elusive.

Originally G Ware Travelstead were going  fund an office complex, but was unable to fund the scheme and it was taken over by North American developers Olympia & York.

In 1987 the master building agreement was signed between Olympia & York and the LDDC for a 12.2 million sq. ft. development at Canary Wharf. 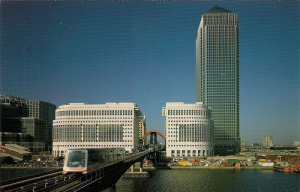 However although building commenced and firms were beginning to move into some of the completed buildings, this progress was halted when in 1992 Olympia & York Canary Wharf Ltd went into Administration. 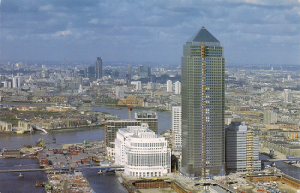 Although they came out of administration the following year and created a new company that would be eventually called the Canary Wharf group the next few years progress was slow until around the turn of the millennium (2000) when  the completed DLR and Jubilee connections solved one of the great problems of the project namely transport for the increasing number of workers to the site.

The increase of high-profile businesses coming into Canary Wharf in the years since 2000 has seen considerable growth both in office space and the retail space that now numbers over 240 shops, bars and restaurants. The number of workers has also increased from 7.000 in 1994 to 75,000 in 2012.

However this success has bought it own problems, the large footprint of the old docks has been gradually swallowed up by new buildings therefore offering limited potential for expansion. Also the City of London in recent years has allowed more skyscrapers to be built trying to regain its position as London’s premier business district. 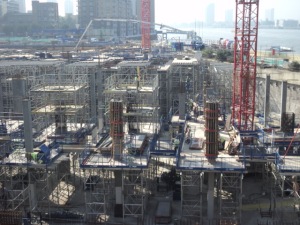 Even high-profile projects like Riverside South has had its own funding problems and it is unclear how it will develop, although it seems clear that the grand Richard Rogers scheme of the twin towers will not be built. 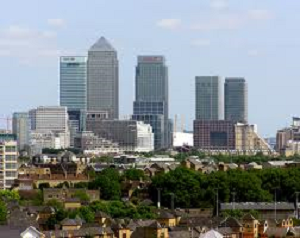 If history tells us anything it is that businesses and business areas rise and fall and time will tell whether Canary Wharf will follow the story of the West India Docks becoming  a powerhouse of London business  before it  gradually fades and declines.