Arthur Morrison is probably best known for his book, Children of the Jago published in 1896, this novel highlighted the notorious Old Nichol District of East London and made Morrison’s reputation as a ‘realist’ writer.

What is probably not generally known about Morrison is that he was born in John Street in Poplar in 1863 and spent much of his childhood in Grundy Street. His father was an engine fitter  who worked in the docks who died when Morrison was quite young, it is believed that his mother then ran a shop in Poplar. The reality of Morrison’s childhood is the subject of some debate due to the fact that when Morrison was older, he tried to hide his rather humble beginnings even to the extent of citing in census returns that he was born in Blackheath.

What he could not hide was the fact that  many of his stories included inside knowledge of the Poplar, Isle of Dogs and Wapping areas.

In Tales of Mean Streets there ia a short story called In Business about a Cubitt Town family that come into a small inheritance.

To come into money is an unusual feat in Cubitt Town; a feat, nevertheless, continually contemplated among possibilities by all Cubitt Towners; who find nothing else in the Sunday paper so refreshing as the paragraphs headed “Windfall for a Cabman” and “A Fortune for a Pauper,” and who cut them out to pin over the mantelpiece. The handsome coloring of such paragraphs was responsible for many bold flights of fancy in regard to Ted Munsey’s fortune: Cubitt Town, left to itself, being sterile soil for the imagination. Some said that the Munseys had come in for chests packed with bank notes, on the decease of one of Mrs. Munsey’s relations, of whom she was wont to hint. Others put it at a street full of houses, as being the higher ideal of wealth. A few, more romantically given, imagined vaguely of ancestral lands and halls, which Mrs. Munsey and her forbears had been “done out of” for many years by the lawyers. All which Mrs. Munsey, in her hour of triumph, was at little pains to discount, although, in simple fact, the fortune was no more than a legacy of a hundred pounds from Ted’s uncle, who had kept a public-house in Deptford.

In a magazine article in 1888 he relates about young love ‘On Blackwall Pier.’

Blackwall Pier! The name strikes the ear with that half-lost, time-agone familiarity which is the inseparable association of Vauxhall Gardens, the Barn at Highbury, and the Eagle Tavern. Blackwall is not as it was. Anyone you meet, from the grimy lounges at the pier-wall to the tradesman behind the most pretentious ‘front’ in High-street, Poplar, will give you the same words – ‘Ah! Blackwall isn’t what it was; Poplar isn’t as it used to be.’ The days looked back upon so regretfully by the local Jeremiahs are the days of East End Commercial prosperity and the days when there such a thing as a Blackwall whitebait dinner, the days of Albert Smith’s first novel, brightener of our youthful leisure. ‘There’s Blackwall!’ ejaculated Johnson, looking out through one of the glazed portholes that form the cabin windows, ‘many a prime dinner I have had at the Brunswick, after fourpenn’orth of rope on the rail. Do you like whitebait?’ The ‘four-penn’orth of rope on the rail,’ with a reference to which the mind of the respectable Mr. Ledbury was thus illuminated, is another departed glory of the district. Any number of indubitable specimens of the ‘oldest inhabitant’ genus are prepared to furnish the inquiring stranger with an extensive collection of things which are not facts dating from the era in which the Blackwall railway from Fenchurch-street was almost the only line of rails in the country, and when the window-less and roofless carriages were dragged to and fro by a rope from a stationary engine on a principle not unlike that of the cable-tramway on Highgate-hill at this moment. 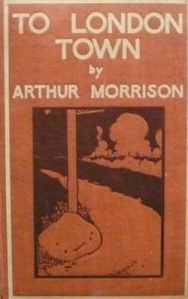 The book To London Town charts the story of a young boy in Blackwall, many of the incidents in the novel are considered  autobiographical.

So Johnny explored the streets with wide eyes and a full heart. For here was London, where they made great things — ships and engines. There were places he fancied he recognised — great blank walls with masts behind them. But now the masts seemed fewer and shorter than in the old days: as in truth they were, for now more of the ships were steamships, filling greater space for half the show of mast. Then in other places he came on basins filled with none but sailing-ships, and here the masts were as tall and fine as ever, stayed with much cordage, and had their yards slung at a gallant slope, like the sword on Sir Walter Raleigh’s hip. And at Blackwall Stairs, looking across the river, stood an old, old house that Johnny stared at for minutes together: a month or two later he heard the tradition that Sir Walter Raleigh himself had lived there. It was first of a row of old waterside buildings, the newest of which had looked across, and almost fallen into, the river, when King George’s ships had anchored off Blackwall — and King Charles’s for that matter. There, too, stood the Artichoke Tavern, clean and white and wooden, a heap of gables and windows all out of perpendicular: a house widest and biggest everywhere at the top, and smallest at the ground floor; a house that seemed ready , to topple into the river at a push, so far did its walls and galleries overhang the water, and so slender were the piles that supported them.

The novel Hole in the Wall is centered around a pub in Wapping.

We walked first to the head of the stairs, where opened a wide picture of the Thames and all its traffic, and where the walls were plastered with a dozen little bills, each headed “Found Drowned,” and each with the tale of some nameless corpse under the heading.

“That’s my boat, Stevy,” said my grandfather, pointing to a little dinghy with a pair of sculls in her; “our boat, if you like, seeing as we’re pardners. Now you shall do which you like; walk along to the dock, where the sugar is, or come out in our boat.”

It was a hard choice to make. The glory and delight of the part ownership of a real boat dazzled me like another sun in the sky; but I had promised myself the docks and the sugar for such a long time. So we compromised; the docks to-day and the boat to-morrow.

Out in the street everybody seemed to know Grandfather Nat. Those who spoke with him commonly called him Captain Kemp, except a few old acquaintances to whom he was Captain Nat. Loafers and crimps gazed after him and nodded together; and small ship-chandlers gave him good morning from their shop-doors.

A hundred yards from the Hole in the Wall, at a turn, there was a swing bridge and a lock, such as we had by the old house in Blackwall. At the moment we came in hail the men were at the winch, and the bridge began to part in the middle; for a ship was about to change berth to the inner dock. “Come, Stevy,” said my grandfather, “we’ll take the lock ‘fore they open that. Not afraid if I’m with you, are you?”

No, I was not afraid with Grandfather Nat, and would not even be carried. Though the top of the lock was not two feet wide, and was knotted, broken and treacherous in surface and wholly unguarded on one side, where one looked plump down into the foul dock-water; and though on the other side there was but a slack chain strung through loose iron stanchions that staggered in their sockets. Grandfather Nat gripped me by the collar and walked me before him; but relief tempered my triumph when I was safe across; my feet never seemed to have twisted and slipped and stumbled so much before in so short a distance—perhaps because in that same distance I had never before recollected so many tales of men drowned in the docks by falling off just such locks, in fog, or by accidental slips.

A little farther along, and we came upon Ratcliff Highway. I saw the street then for the first time, and in truth it was very wonderful. I think there could never have been another street in this country at once so foul and so picturesque as Ratcliff Highway at the time I speak of. Much that I saw I could not understand, child as I was; and by so much the more was I pleased with it all, when perhaps I should have been shocked. From end to end of the Highway and beyond, and through all its tributaries and purlieus everything and everybody was for, by, and of, the sailor ashore; every house and shop was devoted to his convenience and inconvenience; in the Highway it seemed to me that every other house was a tavern, and in several places two stood together. There were shops full of slops, sou’westers, pilot-coats, sea-boots, tin pannikins, and canvas kit-bags like giants’ bolsters; and rows of big knives and daggers, often engraved with suggestive maxims. A flash of memory recalls the favourite: “Never draw me without cause, never sheathe me without honour.” I have since seen the words “cause” and “honour” put to uses less respectable.

In Morrison’s later writing career he moved away from stories of the East End and he created a series of books featuring the detective Martin Hewitt, after 1903 he virtually stopped writing fiction altogether and became an expert on Japanese Art and built up a sizeable collection that he later donated to the British Museum.

The slum fiction of Morrison and especially the Child of the Jago has not really stood the test of time mainly due to  his rather hard negative view of the human condition. Part of the reason for this harshness was perhaps that he wrote about the Child of the Jago from an outsiders point of view. The stories about the areas he knew intimately namely Poplar, Blackwall and Wapping were less harsh and portrayed some warmth for his characters.

By isleofdogslife in Literary Life on December 2, 2013.
← The Story of the Hibbert Gate A New Blog for the Isle of Dogs →