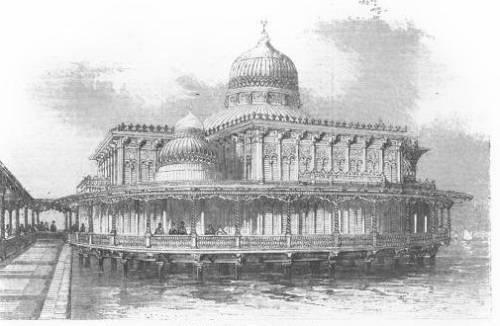 The River Palace (The London Journal) 1860

The Isle of Dogs was one of the sites considered for the site of the Great Exhibition of 1851, eventually that honour went to Hyde Park. However the success of the Exhibition and the Crystal Palace led to a boom in Victorian Architecture made of Iron and glass.

One of the most unusual structures made was a River Palace or Kiosk for the Viceroy of Egypt.

This was manufactured by the famous Ironworks of Henry Grissell at Regents Canal. Henry Grissell was known as ‘Iron Henry’ and had provided high quality Ironwork for prestigious buildings in England, Russia and Egypt.

The palace was designed by Robert Stephenson, one of the most famous Victorian Engineers who had played a major part in the creation of the Egyptian railway network.

The Viceroy of Egypt spared no expense both in using these eminent Victorians but also in the materials used.

In 1858, construction of the Palace began on a piece of land owned by Grissell on the Isle of Dogs and when it was completed became for a couple of years a tourist attraction.

The London Journal of 1860 gives more details of the remarkable building.

The peculiar building which we illustrate this week is remarkable in several respects, and has been constructed of iron by Messrs.  Grissell & Co, from (as we understand) the designs of the late Robert Stephenson. the eminent engineer, The Kiosk for the present Pasha of Egypt will thus form a memento of the genius of Stephenson, of an ornamental character, in contrast with the vast railway works which were carried out in Egypt under his direction.

The plan of the structure, is, somewhat strangely, that of a cross, with arms equal in length, having their internal angles filled by quadrants of circles, and its central intersection crowned with a large conjoined double dome or cupola, the lower’ diameter of which is 40 feet, and its height, from the floor line to the summit (which is terminated by the crescent symbolic of the Moslem faith) is upwards of 80 feet,

It will be observed, by our illustration, that there is a minor cupola over each of the quadrantal portions of the structure, which, in combination with the large central dome, will produce a fine, picturesque effect.

The iron edifice has been put together on a large space of ground adapted for the purpose at the Isle of Dogs, and it is eventually intended to be fixed permanently at Kafrellais. It will stand at some distance from the shore, in the waters of the Nile, the depth of which at this place is 60 feet at its highest rise, and 30 at the fall.

The foundations of the building are of cast iron cylinders, which will be deeply embedded in the sand, and be fixed eight feet above the highest water level. Upon the top of these cylinders girders are to be laid horizontally, for the purpose of supporting the lower platform of the structure, which is of a circular form, and measures 120 feet in diameter. Projecting from the outer edge of the cylinders, as shown in our view, are brackets on which a balcony rests.

One peculiarity of the building is that a bath will be suspended from the centre of the principal dome by an ornamental chain of great strength, which is ingeniously contrived to pass along the top over concealed pulleys, and then be attached to winding machinery.

The style adopted is strictly oriental, partaking of Saraconic peculiarities of detail, and many of the embellishments are of a highly elaborate and decorative character, modelled with great precision and highly finished, and assuredly, as specimens of casting in iron, are amongst the best productions of the kind we have seen.

The Kiosk has been executed under the general Superintendence of Mr. Rishton, of the firm of Messrs. Grissell and Co, Regent’s Canal Iron Works, and Mr. Bewick was the practical manager of the operations. which reflect the highest degree of Credit on all parties. concerned, as affording a most excellent specimen of iron architecture and workmanship.

We should rejoice to hear that the Kiosk, under certain restrictions, would be exhibited for the inspection of the public, previously to its being despatched to the sultry shores of the Nile, on which, as we conceive, it cannot be fixed until the autumnal solstice, after the subsidation of the waters of that remarkable river. 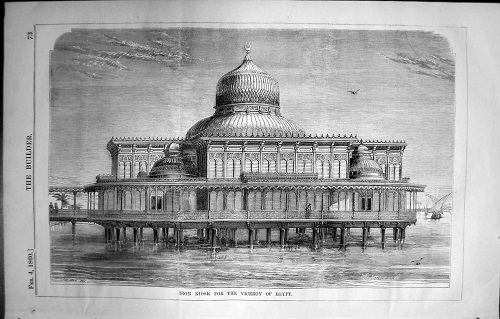 After 1860 the Palace was dismantled and packed to be sent to Egypt, however by the time the Palace was delivered, the Viceroy of Egypt Said Pasha had died in 1863. His successor, Ismail Pasha did not share his enthusiasm for the River Palace and  a later obituary (1883) for Henry Grissell  explains what happened next.

Henry Grissell was engaged to construct all Stephenson’s bridges over the Nile in Egypt, and other bridges and massive cast iron works. His foundry was used as a laboratory, with pioneering examinations of the strength of materials such as cast iron and concrete. He also pre-fabricated a grand bathing-kiosk or river-palace for the vice-regent of Egypt, which was assembled temporarily at his premises at the Isle of Dogs, where its Minton floor tiles, parquetry-work, stained-glass, and domes became a great attraction. But once delivered, the kiosk remained packed-up at Alexandria as the vice-regent had been replaced and the new one no longer wanted it. It was so grand that it was said to be have been considered for re-use as a railway station!

By isleofdogslife in Human Life on December 12, 2013.
← The Story of the London Graving Dock Historic Fireboat Massey Shaw in West India Dock →