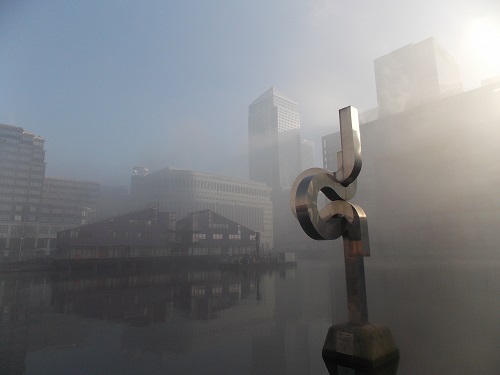 Last week the Isle of Dogs and Canary Wharf in particular were over a couple of days shrouded in fog  for a few hours in the morning before the sun burst through. 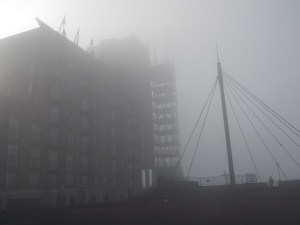 These fogs are not unusual in the Isle of Dogs due to its proximity to the river and it’s low-lying terrain. Although these fogs often cause minor delays for the river traffic, the disruption is generally minimal. 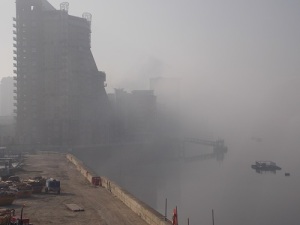 However if we go back just over 50 years and beyond, London fogs or London particulars as they were known not only caused widespread disruption but were responsible for a large number of deaths.

London’s wealth was often built on the wide range of manufacturing taking place in the city, little thought was given to the effect of the pollution going into the river or the pollution billowing out of the thousands of chimneys  into the atmosphere.

By the late 19th century the effects of this pollution was most obvious in the winter months when it combined with dank and damp weather conditions, the following newspaper report from the Daily News of 1888 illustrates some of the problems.

Do you know what a real London November fog is? Having gone through an exceptionally trying ordeal of the mixture during the most dismal and melancholy month of the a calendar, I fancy that I am qualified to describe the phenomenon. The pea soup fogs of the metropolis, which are unique, and are really coal, in solution, which falls in the form of smoke and sooty particles upon the lower strata of the atmosphere when there is not sufficient circulation of air to carry these matters off. A high barometer, the sign of the stillness in the aerial regions which allows all the discharges from the million chimneys of London time to condense upon the cold, watery particles of the atmosphere, and afterwards to descend in this amalgamated condition upon our devoted selves. we are enshrouded in a thick fall of fog, dense in consistency, bilious brown and yellow in colour, and pungent and sour to the taste.

During the worst of it a more than midnight darkness broods over the scene; all traffic in the river is stopped, cabbies lead their horses, and gas-lamps in the street and in the offices make a feeble kind of protest against the tyranny of King Fog, electric lights are no good at all, and throw a sickly uncertain illumination on the ghastly picture. The moral effect is most deplorable; with everything wrapped within this dreadful sheath of foul fog, and everybody stealing about like ghosts, a sense of depressing unreality seizes on one, there can be no doubt but that the London fogs kill many people, with delicate throats and chests, and injure large numbers. After a day’s battle with a bad fog, you return to your suburban retreat covered with filth; collar and cuffs turned from white to brown, and the face and hands in need of the scrubbing’ brush; the nostrils, lined with soot, indicate the extent to which the lungs are affected.  It is a mystery to me why Londoners do not insist that this fog matter shall be made a Parliamentary question. The loss to trade through delays and accidents is very considerable, and injuries and inconvenience to the five million inhabitants of the metropolis and its population are incalculable. 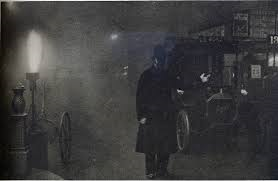 The simple answer why parliament did very little about the problem was that economic prosperity was valued over environmental problems which may only be really disruptive for a few days per year.

The Docks and the River were dangerous places to work even when conditions were good, when heavy fog descended there was often fatalities as indicated by the following reports.

1891
FOG IN LONDON – TWENTY-FIVE PERSONS  DROWNED AT THE DOCKS
LONDON, DEC 25.
The dense fog which has been prevailed in London for several days past is still extremely severe, and is causing great inconvenience , no fewer than 23 persons have been drowned at the docks by falling into the water.

NOVEMBER FOG IN LONDON
LONDON, November 5.
The dense fog which settled over London and the neighbouring districts last Saturday still continues. Many accidents have been reported, including the drowning of fourteen dock workers at the London Docks.

1921
SHIPS COLLIDE IN FOG.
LONDON, Monday.—Six ships- collided in a dense fog, near the West India docks on Saturday night, one of which sunk and the crew narrowly escaped. 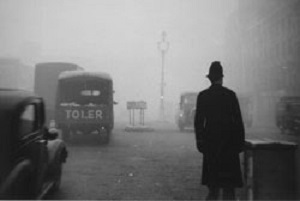 Towards the end of the Second World War up to the early 50s , there were a series of cold winters that produced a large number of foggy days which culminated in the Great Smog of 1952 which turned what was seen as an occasional inconvenience into a National Disaster.

There was a number of factors that contributed to the Great Smog of 1952, the November and early December was very cold with heavy snowfalls, this led to people burning large quantities of coal which created a large amount of smoke. Weather conditions rather than dispersing the smoke, trapped it above London with the pollution from the factory chimneys. 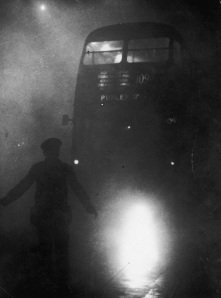 On the 5th December, the fog developed  and large amounts of impurities were released into the atmosphere, over the day the fog thickened to such an extent that in many parts of London drivers and pedestrians found it impossible to see even a few yards away. It was said on the Isle of Dogs the fog was so thick that people could not see their feet. 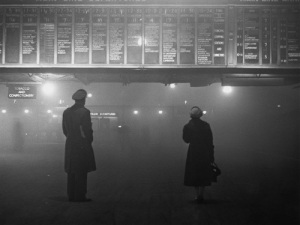 Over the next three days the fog continued and a large number of people began to suffer breathing problems and hospitals began to be under pressure to cope with the demand.

When the fog finally cleared on the 9th December, it was estimated 4,000 people had died has a result of the fog.

Many thousands more suffered from bronchial problems, it was even said that cattle had choked to death at Smithfield Market. 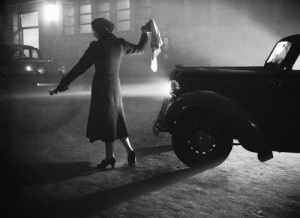 In the weeks after the smog an even grimmer picture began to develop, as the following news report suggests.

LONDON,, Fri. — London’s “great smog ” disaster in 1952 took 12,000 lives, not 4000 Dr Ernest Wilkins,- head of the atmospheric  pollution section  of the  Scientific and Industrial Section told the Royal Sanitary Institute in London. He  said that 4000 Londoners died  during or immediately. after the smog, but 8000 more died in January and February 1953, and these had to be added to the total of the victims.

One of the main causes for the distress was the high levels of sulphur dioxide which a later report points out.

The fog which blanketed London a fortnight ago was seven times more poisonous than ordinary fog, and contained corrosive sulphur fumes in never before recorded strength.

Eventually politicians and the government were forced to act which eventually led to Clean Air Act 1956 which banned the use of coal for domestic fires in urban areas and moving power stations out of cities.

These measures did take time to have effect but eventually real progress was made and the Great Smogs became a distant memory.  It didn’t mean the end of pollution however,  with car fumes then becoming the main source of concern .

By isleofdogslife in Cultural Life on March 18, 2014.
← The Ferry House- The Oldest Pub on the Island Water City Exhibition at Gallery@LR – Frank Creber Artist →