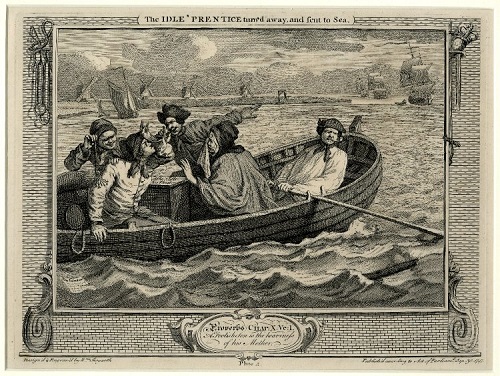 In the 18th century the Isle of Dogs were largely uninhabited but there were on the west side of the Island a series of windmills from as early as 1700s from which Millwall got its name.

One  Mill near to the top of the Island was built in 1730 and 61-year lease was granted  to Thomas Rawson, miller, of Poplar. The site, with 150ft of river frontage, covered three acres.

However it had a new owner in 1735  belonging to Nicholas Felton, miller, of Rotherhithe. It was in Felton’s windmill in 1737 that an accident took place and a young worker named Samuel Wood suffered a horrific injury.

Samuel Wood engraving with an inset of how the accident happened

An article from Portraits, memoirs, and characters, of remarkable persons, from the revolution in 1688 to the end of the reign of George II. Collected from the most authentic accounts extant (1819) gives us more details of the accident,

THIS man, a native of Worcestershire, was employed by a miller on the Isle of Dogs, nearly opposite Greenwich. On the 15th of August, 1737, being engaged as usual in the duty of the mill, he, unfortunately, at the time it was in full action, became entangled in the cogs of the wheel, which, carrying him completely round, placed him in the most imminent peril of his life, and lacerated his arm from his body. He was providentially thrown on a quantity of meal, but lay for a considerable time in a helpless condition before he was discovered ; and, on the day following the accident, was conveyed to St. Thomas’s Hospital, Southwark, where he remained until a perfect cure was effected by surgeon Ferne.

With the money he collected, and the assistance of some friends, he was enabled, after his discharge from the hospital, to open a public-house in the Mile-end-road, and was living there in the year 1763. He also obtained the situation of a custom-house-officer.

What caused the considerable interest in the case was not just the accident  which was not probably that rare but the fact that Samuel Wood made a full recovery.

Another engraving of Samuel Wood with the Windmill in the distance

This attracted the interest of the medical profession and the accident was described in some detail by Guy’s Hospital surgeon John Belchier FRS (1706-1785) in the Philosophical Transactions.

Belchier was interested both in the severe nature of the accident  but also in Samuel’s survival.

Samuel Wood, about 26 Years of Age, Servant to  Mr Felton, being at work in one of the Mills near the Isle of Dogs,  and going to fetch a sack of corn from the further part of the Mill, in order to convey it up into the hopper, carefully took with him a rope, at the end of which was a Slip-knot, which he had put round his wrist; and passing by one of the large wheels, the cogs of it caught hold of the rope, and he not being able to disengage his Hand instantly, was drawn towards the Wheel, and raised off the Ground, till his body being check’d by the Beam which supports the Axis of the Wheel, his arm with the shoulder-blade was separated from it.

At the time the Accident happen’d, he says he was not sensible of any pain, but only felt a tingling about the wound, and being a good deal surprised, did not know that his arm was torn off, till he saw it in the wheel.

When he was a little recover’d, he came down a narrow ladder to the first floor of the Mill, where his brother was, who seeing his condition, ran, down stairs immediately out of the Mill to a house adjacent to the next Mill, which is about a hundred yards distant from the place where the Accident happen’d, and alarm’d the inhabitants with what had happen’d to his Brother, but before they could get out of the  house to his assistance, the poor man had walk’d by himself to within about ten Yards of the house, where, being quite spent by the great effusions of Blood, he fainted away, and lay on the Ground .

They immediately took him up, and carried him into the house, and strewed a large quantity of Loaf- Sugar powder into the Wound, in order to check the blood, till they could have the assistance of a Surgeon, whom they sent instantly for to Limehouse.

But the messenger being very much frightened, could not give the Surgeon a clear idea of the Accident, for that when he came to see the condition the man was in, he had no dressings with him for an Accident of that Kind ; but had brought with him an apparatus for a broken Arm, which he understood by what he could learn from the messenger to be the case; however, he sent home for proper dressings, and when he came to examine particularly into the Wound, in order to secure the large bloodvessels, there was not the least appearance of any, nor any effusions of blood ; for having first brought the fleshy Parts of the Wound as near together as he could by means of a needle and ligature, he dosed him up with a warm Digestive, and apply’d a proper Bandage.

The next Morning he open’d the wound again in Company with two Surgeons more ; and not perceiving any effusions of blood at that time, he dressed him as before, and sent him in the afternoon to St. Thomas’s Hospital, where he was admitted a patient under the Care of Mr Ferne, from which time he was constantly attended, in expectation of a haemorrhage of blood from the Subclavian Artery ; but there being no appearance of fresh Bleeding, it was not thought proper to remove the dressings during the space of four days, when Mr Feme open’d the Wound, at which time likewise there was not the least appearance of any bloodvessels  so he dressed him up again, and in about two months time the cure was entirely completed.

Upon examining the arm within a day or two after it was separated from the Body, I found the scapula fractured transversley, as were likewise the Radius and Ulna in two places : But whether these Bones were fractured before the arm was torn off, the man cannot possibly judge.

But what is very surprizing is, that the Subclavian Artery, which could never be got at to be secured by Art, should not bleed at all after the first dressing; the Artery being separated so happily, that when the parts of it were contracted, the fleshy parts pressed against the mouth of it, and prevented any effusion of blood.

As this case is very singular, and so remarkable, that no history can furnish us with any instance similar to it, in order to give a particular account of it, besides visiting the Man frequently, from his first admittance into the Hospital, and getting from him what Information he was capable of giving me, I went myself two days ago to the Mill where the accident happened,and inquir’d into every particular circumstance relating to the fact, of Mr Felton, with whom the Man work’d, the woman of the House where the man was carried into, and the Surgeon that dressed him, who all certified to me what is above related ; and for the farther satisfaction of the Society, I have brought the man himself, and likewise the arm, just as ’twas torn from his body, which has been kept in Spirits ever since the accident happen’d.

Although we might be appalled at Mr Belchier’s insensitivity at taking Samuel Wood and his detached arm to show to the Society, the fact was that the case made Samuel Wood into a bit of a celebrity and engravings of him and his arm were sold in the streets and may be how he was able to open the tavern in Mile End.

It  is clear from the Doctor’s report that in such a severe accident they would have expected Samuel to bleed to death or die from infections which was probably what happened to the majority of people who suffered such injuries, but what probably saved Samuel was that for some reason  he did not lose a lot of  blood and the wound was kept clean and was closed very quickly which prevented infection.

By isleofdogslife in Human Life on April 25, 2014.
← Lawn House and the Many Faces of Glen Terrace “Steering Christ” in Limehouse →