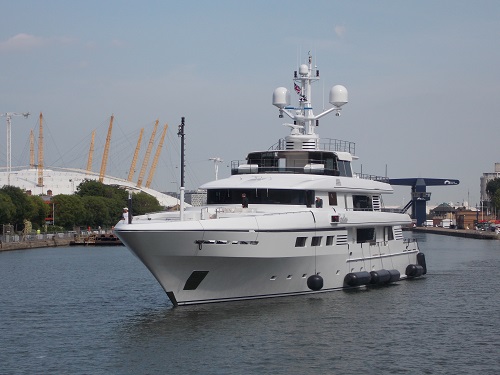 Emelina is a 51m motor yacht, custom built in 2008 by Codecasa in Italy.

She has accommodation for up to 12 guests in 2 suites, she also capable of carrying a crew of 10. 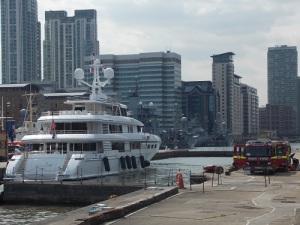 One of the novelties of the ship is a foldable sea balcony in the owner’s suite, giving direct access to the sea.

As usual in the world of Superyachts, the two questions that most people will ask namely how much did the ship cost to build ? and who owns her ? are very difficult to find out.

However she will have company in a very crowded West India Dock until Sunday when the German Navy will depart.

By isleofdogslife in Dock Life on May 16, 2014.
← The German Navy at West India Dock Part Two – (M1093) Auerbach/Oberpfalz,(M1098) Siegburg and Seehund Drones Aboard the German Navy Ships by L. Katiyo →