In a recent post on the Bridge exhibition, there were a  couple of photographs  by Albert Gravely Linney ,  although he was not a professional photographer, his work is now considered very important because he captured all aspects of the River Thames  just before the destruction of World War Two.

Albert Gravely Linney was a writer and journalist who in 1925 became  the first editor of the new Port of London Authority Monthly Magazine  which gave him full access to most of the docks and wharves along the river.

Wherever he went, Linney took his camera. He also published a number of books featuring stories and the history of the Thames,  his most popular books  being  Peepshow of the Port of London  and The Lure and Lore of London’s River .

The Museum of London holds thousands of  Linney’s photographs and over the next few weeks I will do a series of posts showcasing his work in relation to the Isle of Dogs.

First of all is the photographs that Linney took at Trinity Buoy Wharf in the years 1927 – 1930, what is really fascinating about this series of pictures is to see Trinity Wharf as  a working centre.

For nearly 200 years, from 1803 to 1988, Trinity Buoy Wharf was occupied by the Corporation of Trinity House, initially for storing buoys and sea-marks, but in the 19th century took over the responsibility for testing chains, anchors and cables which led to the building of number of workshops and a lighthouse for testing, repairing and making equipment.

In the 1930s that work was still being undertaken, so we have pictures of men painting Buoys and the mountains of chains and cables. We also have next to Trinity Buoy Wharf , the famous Thames  Ironworks which closed in 1912 but a few buildings at this time still remained.

Miscellaneous views: A Trinity House vessel moored alongside the Trinity Buoy Wharf, Blackwall, in August, 1930. Bow Creek, the entrance to the River Lea is on the right. A.G. Linney ,1930  (Museum of London )

Miscellaneous views: Buoys lined up on the quayside at Trinity Buoy Wharf, Blackwall, in March, 1929. In the background is the Engineering Department building of the Thames Ironworks, which was demolished around 1948. A.G. Linney ,1929 (Museum of London )

Miscellaneous views: Mooring chains awaiting tests at Trinity Buoy Wharf, Blackwall, in July, 1927. The man in the foreground is the Superintendent of the Trinity House Depot, Mr Reynolds. A.G. Linney ,1927 (Museum of London ) 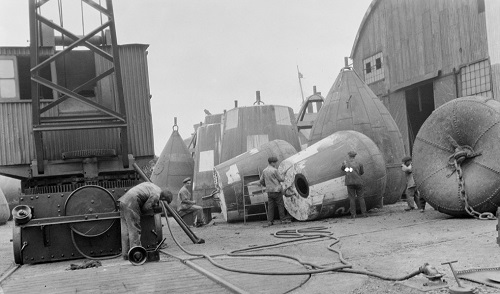 Miscellaneous views: Painting buoys at the Trinity Buoy Wharf, Blackwall, in July, 1927. Linney did not take many photographs of people actually at work. A.G. Linney ,1927 (Museum of London ) 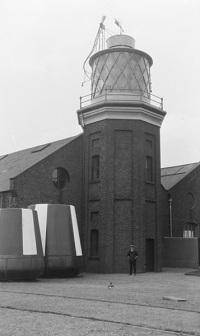 Miscellaneous views: The experimental lighthouse at Trinity Buoy Wharf, Blackwall, in June, 1929. Built in 1864, the lighthouse has survived although Trinity House sold the site in the late 1980s.A.G. Linney ,1927 (Museum of London )