After the excitement of the Tall Ships, it is back to normal in West India Dock with the arrival in the early evening of the Super Yacht  SY Christopher.

However there is a connection with the Tall Ships they started in Falmouth before coming to Greenwich, the Christopher was launched in Falmouth in December by Cornish ship builders Pendennis . 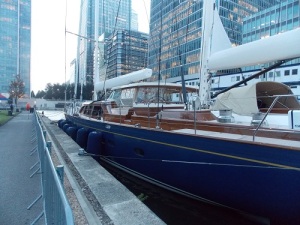 The 46m (150ft) ketch was designed by Ron Holland, based on the classic yachts of the past.

The yacht has  three staterooms and a study that will provide guests with accommodation for up to 12, with a further four cabins forward, sleeping eight crew.

The yacht has recently been  in Scandinavia and as usual with Super Yachts little is known about the owner or its future plans .

In contrast to the clear bright evening , early this morning the Phoenix Reisen cruise ship Albatros was spotted making its way around the Isle of Dogs in a river mist. 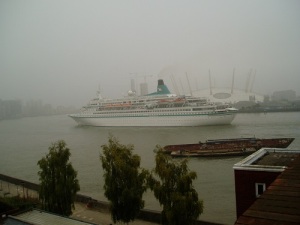 By isleofdogslife in Dock Life on September 18, 2014.
← The First Day of the Blitz on the Isle of Dogs – 7th September 1940 Farewell to the TS Royalist in West India Dock →