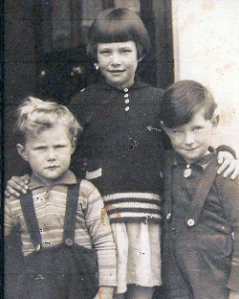 Recently I was contacted by Lorraine Roxon Harrington who kindly sent some of memories of her childhood on the Isle of Dogs. Lorraine paints a vivid picture of the Island in the 1930s and 1940s, in those days she was known as Violet Smith and lived in Stebondale Street.  Her recollections begin at the start of the World War II, where she describes her family, surroundings and  the strange appeal of  ‘locust’.

When World War II was declared I was twelve-and-a-half years of age. I had previously attended Cubit Town Infants School but had passed my exams and was now at Millwall Central Grammar School. My name was Violet Smith and we were a family of six. There was Mum, Dad and my three younger brothers. I remember us as a close, loving family.
I believe the war did a lot of harm, but as the saying goes, “Out of evil cometh good”, and the one good that came out of the bombing was the demolition of houses ridden with bugs, mice and fleas. Most of these slum houses were owned by the church, and I can understand why my parents were non-believers and could see no good in religion when church authorities allowed such houses to exist, whilst collecting rent from poor people. But our house was not one of them, and Dad, being a builder and decorator, kept it in good order. The area is now very different and part of it is called the Docklands. New, expensive town houses have been built where the wharves once were, and by their sides are moorings for their owners’ boats. 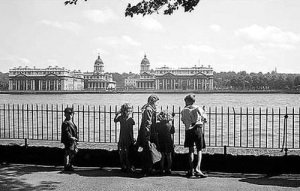 As a child, I would sit in Island Gardens, a park at the end of our street. The gardens had a playground with a cafeteria and the river Thames flowed past. This is where the underground tunnel to Greenwich is situated. It stands as it was, unchanged by the war. Before the war it was usual for me to sit on one of the park benches on my own and watch the boats go up and down the river laden with cargo. The Thames was always dark brown and murky with bits of old wood and rubbish floating along in the current. Hours would go by and I would write down the names and draw the flags of the boats as they sailed along the river. 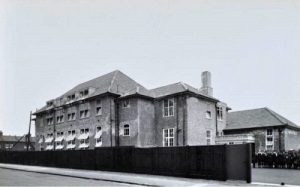 Because I was a child with a lively imagination quite a lot of my time was spent daydreaming. My thoughts would carry me away to the countries the boats had come from. Here there was a particular smell, which can still easily evoke memories of the past. When a mist surrounded the area, the smell became more prominent. Of the many things that made up the smell was something called locust. There would be lots of it lying on the ground in the street near the wharves and we children would pick it up and eat it. It was sweet to taste and many years later while on holiday in Spain I saw this curved fruit hanging from the tree. In Spain, the fruit was a nice, fresh, green colour, but it was black and dried when we used to eat it. We had no idea whether it was suitable for human consumption, but we all ate it and no harm came to us. I think it was ground down and used as cattle feed. In those days, children never thought of hygiene and maybe a few of the germs we picked up gave us some protection from disease. 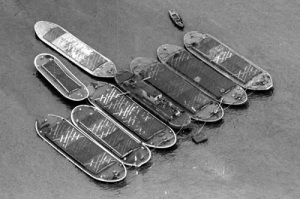 Lots of children would go to the wharves and play on the barges moored by the river, but my brothers and I were never allowed to go near them because Mum and Dad told us it was dangerous and that children had been known to drown or be crushed between two barges. We never heard of any child getting hurt, but that was the story Mum and Dad told us and it was good enough to keep us away. I did go with a friend a couple of times and was amazed at the pieces of broken white clay pipe that were washed up on the muddy beach. I would take a few pieces and use them to draw hopscotch lines on the pavements. How they came to be there, I still do not know. The only reason I can think of is that sailors threw them in the sea when they were broken. They must have been discarded years ago and so they were of great interest to me.
We were lucky children as a park backed onto the end of our garden and although a great deal of poverty existed in the East End, children were never short of parks. There was Greenwich Park with Plum Pudding Hill and Island Gardens where the large domed entrance to the foot tunnel was situated. There was also Blackheath and Kidbrooke, but they were too far away to go to alone. 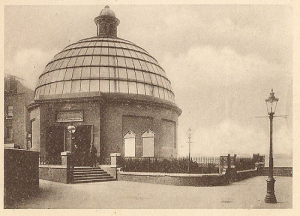 We lived in Stebondale Street, which led to Island Gardens. The park was home to a round iron lift built in Victorian times. A ride down the lift and a walk through the tunnel and then up another lift and you would arrive in Greenwich. Sometimes, I would play a game with myself imagining that the tunnel suddenly cracked and the river came rushing in and I would run quickly through the tunnel in order not to drown. White glazed tiles covered the tunnel’s curved walls, which were always wet with condensation; I used to think this was the river seeping through. We would shout while running through the tunnel so we could hear the hollow sound and the echo of our voices. I can still hear the noise of the gates as they closed. It was all so exciting and the use of the tunnel was free for everyone to use, and still is today.

Lorraine at nineteen was a Lucy Clayton Trained Model and modelled in many of London’s top fashion houses.  In 1949, she married a Doctor of Medicine who later became a Consultant  Psychiatrist. and had a daughter and two sons, and is now a grandmother to nine grandchildren.
In 1979 she left England and with her second husband and moved to New Zealand and opened a number of beauty salons and her own Beauty Therapy Training College.
Lorraine also began to write her own regular page on beauty in The NZ Headway Magazine. In 1987 she and her husband retired and moved to Australia where she developed her creative skills becoming an artist, ceramicist, sculptor, poet and a published author.

By isleofdogslife in Human Life on December 2, 2014.
← The Mystery of Sir Walter Raleigh’s House in Blackwall Tragedy at the Anchor and Hope, Westferry Road – 3rd December 2014 →