On a warm sunny day , the West India Dock  welcomed the Super Yacht Ilona, the Ilona last  visited the dock in December last year and also visited when the 2012 London Olympics was taking place.

The yacht stayed in West India Dock for a considerable time on her last visit and created quite a large amount of interest and will likely turn a few heads this time.

The 73.81 metres (or 242 ft) long custom built yacht was launched by Amels in the Netherlands in 2004 and she has also refitted in 2006, and 2012. She is classed as one of the world’s top 100 largest private yachts and has the unusual feature of a helipad, when she was built the helicopter could be stowed in a hangar below deck. In the latest refit, the helicopter garage was replaced by a large 10m by 3m swimming pool. 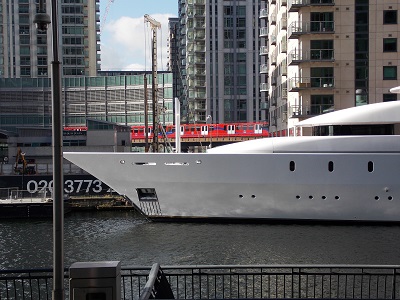 Estimated to have cost 100 million dollars, the Super Yacht Ilona is owned by one of Australia’s richest men, businessman Frank Lowy who made much of his fortune developing shopping centres with the Westfield Group. Lowy has also been one of the main individuals  responsible for developing professional football in Australia in the last decade.

Unusually for a Super Yacht owner, Lowy and his family have used the yacht to travel extensively around the world and the boat is the fourth yacht called Ilona which has been built and launched for the owner. 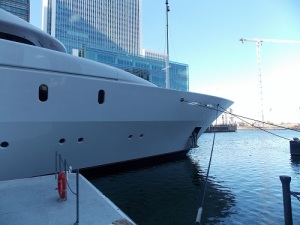 As usual in the secret world of Super Yachts, little is known about plans of the owner or the boat during its stay. Whatever the plans, the boat provides plenty of on board comfort with a cinema, a massage room and a gymnasium. The boat can also accommodate a maximum of 16 guests, in 6 cabins and carries a crew of around 28. 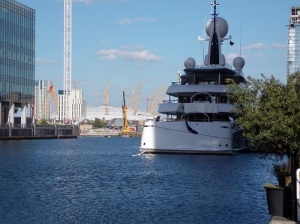 By isleofdogslife in Dock Life on August 6, 2016.
← The Changing Face of the Isle of Dogs – August 2016 The Strange Story of an Infernal Machine in Limehouse Cut in 1882 →