Yesterday I was delighted to attend the opening of “The Changing Island” photographic exhibition taking place in Cafe Vert at George Green’s school. This is part of the school’s  Heritage Lottery Funded project celebrating 40 years on this site and the history of George Green.

‘The Changing Island’ photography project involved students from the school working with well-known photographer Mike Seaborne. The students  were introduced to the idea of using old photographs taken by Mike in the 1980s to explore the past and re-photographing certain locations to produce a ‘Then and Now’ comparison. 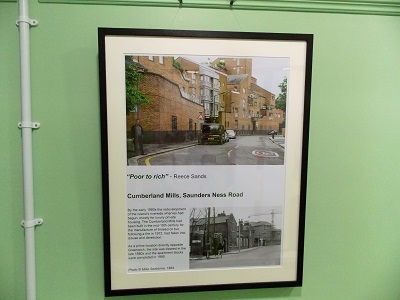 Looking around the exhibition it became clear that the project had provided an opportunity to the students to illustrate how many of the old industries on the river front have disappeared to be replaced by residential developments.  Change has been a constant theme on the Island for the last 200 years, however although buildings may disappear, there of echoes of the past all around us if you know where to look.

It was also pleasing to see many local residents turning up to the exhibition and sharing their memories with the young people. With less extended families living on the Island , communication between the young and old is vitally important for local knowledge to be handed down.

The exhibition is just one of many initiatives looking into the history of the Island at the moment which builds on the many projects of the last 30 odd years. Contrary to popular belief, there are not that many people who record the changes happening around them. Mike Seaborne’s photographs of the 1980s are one of very few records of change on the Island  in that turbulent period. Hopefully the exhibition will encourage more young people to record the changes around them for future generations.