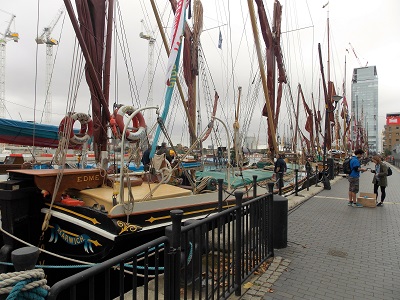 It is a great time for nostalgia on the Thames with Tall Ships floating past the Island and one of the biggest parades of Thames Sailing Barges seen for a long time in London over the weekend. 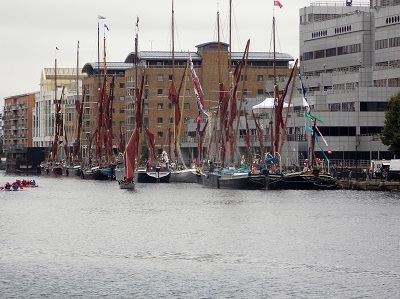 Lined up in West India Dock is around ten Thames Sailing Barges which at around 3.30pm on Saturday will form a parade and make their way onto the Thames and sail up to Tower Bridge.The Barges going under the raised Tower Bridge will be a wonderful sight and reminder  of when hundreds of the barges would sail into The City of London to pick up and discharge cargo.

The Thames sailing barge was the name given to a type of working sailing  boat common on the Thames in the 19th and early 20th centuries. The flat-bottomed barges were perfectly adapted to working in the Thames Estuary and beyond. Some worked along the coast and even went to continental European ports. 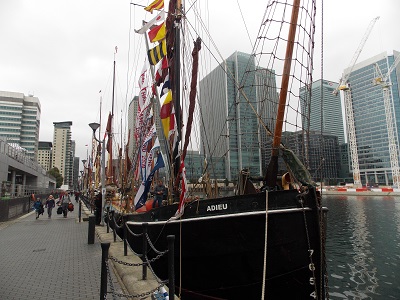 They carried many different cargoes, but often transported bricks, sand, coal and grain. Due to the efficiency of a Thames barge’s design, they only needed a crew of two for most journeys. Known as one of the ‘workhorses’ of the Industrial Revolution, in their heyday there were thousands of Thames Sailing Barges but it is now estimated that there are less than one hundred. 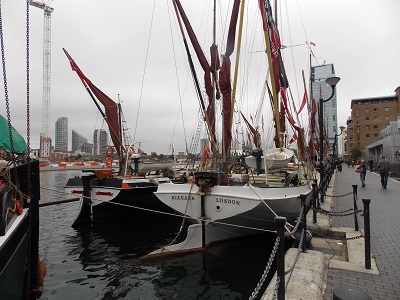 If you would like to see the Barges close up, on Sunday 18th September there will be a Sailing Barge Open Day at West India Dock. The Barge area will become a Popup Museum, open free to the public. 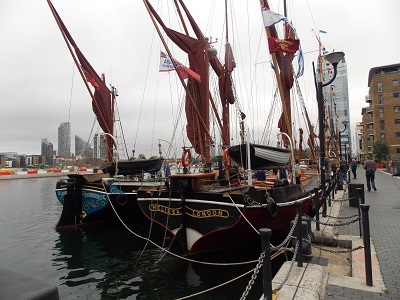 Shoreside activities at West India Dock include full access to the partaking barges so the public can learn of the barges history as well as meet and mingle with barge owners and crew members,.