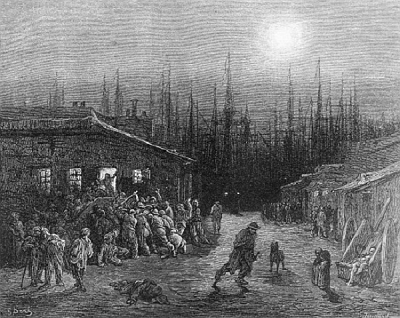 In 1860’s  a British born writer Richard Rowe (Peter Possum) who had made his name writing for Australian newspapers and journals returned to Britain and began to write articles which were then sent back to Australia.  Previously I published his impressions of the Thames Tunnel, in this article for the Argosy magazine he turns his attentions on the Isle of Dogs.

But when I wandered through the docks, I had still time upon my hands. A sudden thought struck me – I would explore the Isle of Dogs. The name is a household word to all Cockneys – they have heard it played upon scores of times in punning pantomimes; but how many of them know anything of its local habitation beyond the glimpse that may be got of its fringe from a Gravesend or Margate boat? No one, except on occasion of a great ship-launch, would think of going to the Isle of Dogs for pleasure, and great ship-launches unfortunately do not take place there now.

The artisans who used to swarm to it for business from Poplar and East Greenwich frequent it now in sadly diminished floods. At its busiest time it was a terra incognita to the vast majority of Londoners; now it possesses in addition the painful interest of being comparatively deserted by its  flourishing denizens. I set out for a walk round it, although within earshot of  railway whistles and almost within eyeshot of St. Paul’s, with a prose-dashed feeling of the poetry that must affect a visitant of ruined cities buried in American forests.
On the right rose the dead wall of the West India Docks, with little black hut showing at regular intervals above, furnished with pulley-wheels, as if inhabited by marsh-hermits who so hauled up their supplies. I crossed white drawbridges ridged with high metal flanges to keep crossing waggons in the middle. On the left rolled the almost vacant reach of river; on the right masts rose above brick walls, looking as land-sprung as park-trees; and vessels and timber floated in lanky artificial lochs. I passed “Lloyd’s Proving Range,” a long lofty gallery of rusty corrugated iron, bristled with scolloped pinnacles; and paced the deserted streets of Cubitt Town.

I once heard a humorous Kentish rustic describing a part of Maidstone as a locality which the Creator had “made o’Saturday night, and so he left it unfinished.” I was forcibly reminded of that somewhat bold description whilst wandering through Cubitt Town. The houses are of the normal squat, flimsy, featureless class which finds favour with the “cheap builders” of London; but suddenly every pretence at pavement vanishes, the post of the “doctor’s” red lamp at the corner stands lonely as Eddystone lighthouse, and the street runs into marsh, on which horses, with burs in their manes, are fattening themselves for the knacker’s yard, mud-streaked little pigs are squeakingly complaining of the bites which stray mangy dogs persist in taking at their by no means too plumps behinds, and patriachally-bearded Billygoats, big-uddered Nannygoats, and frisky kids are nosing and vaulting amidst shards of yellow pottery.

In the distance tower truncated pyramids of red and yellow brick, with grey haze wreathing over them. Nearer at hand are wastes of hummocked land, laked with pools of stagnant, scummily-irised water, which the bigger small boys of the place have converted into artillery ranges; more diminutive brethren being the whimpering targets for their hot fire of oyster shells. 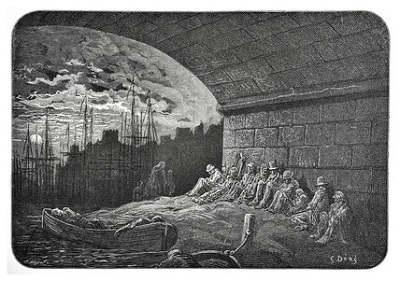 The grey-stone church, the red and yellow brick schools, are almost the only wholesome-looking building in the town. Most of the houses look like decaying mushrooms. There is an appalling proportion both of private dwellings and of shops “To Let;” the lower windows of the former being roughly boarded up to exclude gratuitous tenants. Public-houses are plentiful, but the dinginess which previous thronging custom has brought upon them stands out with dismal prominence in their present desolation. Workmen who can get no work, unshorn and clad in dirty duck and greasy corduroy, lounge about in knots of three and four, drearily moping, still more drearily joking at to the probabilities of the passing stranger’s standing an eleemosynary pint. The puff of a steam-engine, the rattle of a hammer, are sounds as rare as welcome. Again and again the road is fringed with a long range of workshops, through the starred holes of whose broken windows no bustle can be seen, no clank of tools, no hum of voices comes. Broad, white-lettered black boards above their portals announce “These Desirable Premises to be Sold or Let on lease.”
Between two such establishments a narrow street runs down to a deserted pier. The green grass is fast covering the black clinkers with which it is paved. At the bottom a glimpse may be got of a deserted shipyard. It is a forest of bare poles. On the pebbly “hard” into which it slopes lies a dismasted black barge – her cracked, sprawling sideboard looking like the broken fin of a dead, stranded whale. That may be taken as the type of the shipyards of the Isle of Dogs at present. I saw only two vessels shored up for repairs; abnormal quiet reigns even in the ship-breaker’s yard, littered with sea-greened copper, fractured spars, sun-blistered planks, and noseless, armless figure-heads. Other trades, however, seem still to thrive in the Isle of Dogs and perfume its atmosphere with a strange medley of malodour. Were it not for the penetrating scent of abundant tar, the nose would collapse under the infliction of the horribly mingled stinks of rancid grease, bilge-water, and mysteriously anonymous “chemicals.” “Family Night Lights” have a great factory all to themselves in Millwall. As you follow the river’s curve, you pass all kinds of works – some of them so big that their buildings have to be linked on to one another with rhubarb-coloured bridges running above the roadway. Boeotian fatness broods in the air around this oil mill. The steam corn mill next to it is furred with flour in streaks like rain-furrowed whitewash. Above this wall peeps a chaos of blighted-pumpkin-like boilers and pipes carefully wrapping in filthy, shaggy swathing. Through the wall runs a hose, swelling like an angry snake as the stream which the turncock in mufti has just supplied from the plug outside rushes through it. Just inside that wall a lofty chimney-stalk springs up like a blasted Californian pine, seemingly quite cut off from the works to whose ill-humours it gives vent. The smoky, dumpy cones of a pottery come next, pitched higgledy-piggledy amongst ash-heaps, rain-pools, clay-piles and avalanches of smashed pipkins. The pottery cones are cracked, but they seem to be chuckling over the thought that if they tumble, they will not have so far to fall as their tall neighbours, some of which are also cracked, and others prophylactically hooped like barrels – a precaution which gives them the aspect of vastly-magnified bamboos. In the midst of the fuming chimney-stalks, rumbling wheels, and panting engines, is interposed the cool, quiet contrast of a stone-yard, with moist numbered blocks piled one upon another and arranged in avenues, like “Druidical remains.”
I have said that no one would dream of going to the Isle of Dogs for pleasure; but nevertheless, I found “villas” there; enclosed in smart palisades, skirted with grass-plats and fringed with little trees and shrubs. Apparently their builder soon repented of his enterprise, for one of the small number can only boast of a basement, and moulders a ready-made ruin above its shaggy lawn. Noble Greenwich Hospital opposite, backed by its wooded hill, looks pityingly across at the pretentious row that dares, perched on the margin of a marsh, to assume Cockney architectural airs in face of its time-mellowed domes and colonnades.
In spite of its frill of works, the Isle of Dogs still looks a marsh. Blind alleys between the works are blocked with river-wall: where little lanes open on the river, the island seems to have sprung a leak, and one expects the water to rush in. Mist hangs about the flat, creeping hither and thither like visible ague: the houses look as if they had caught cold through not changing their wet stockings. The one omnibus which has come to an irresolute stand-still in the miry main street of Millwall, “like one who hath been led astray,” seems to have wandered from some slug-haunted old yard in which superannuated “buses” are laid up in mildewed ordinary. The two policemen look equally blue-mouldy, and pine for the far-off beats in which more fortunate brethren behold cooks’ faces beaming like rising suns between area rails. The hobbydehoy roughs who loaf out amongst the puddles have something alligator-like in their moist lankiness. The cheap periodicals in the one or two little shops, which satisfy the island’s thirst for literature, appear damper than when they came fresh from the press a month ago. “Champagne Charley” and the “Three Jolly Dogs” droop along-side them in lugubriously limp coarse woodcuts, hydropathically cured of all their fastness. Jolly Dogs in the Isle of Dogs seem as much out of their element as Clown, Harlequin, and Pantaloon at a Methodist class-meeting.

The 1850s was a boom time for the Isle of Dogs, the building of Brunel’s Great Eastern and other shipbuilding  on  the Island had attracted workers from all over the United Kingdom. However by 1866 there was a financial crash that devastated the shipyards which caused great distress among thousands of workers. This distress continued unabated for the next three years putting considerable strain on local authorities and charities to provide relief. Although Peter Possum wrote whimsical pieces, the article does give some illustration of the state of the Island at the time.

By isleofdogslife in Human Life on December 14, 2016.
← Super Yacht Force India in West India Dock Tales of London’s Christmas Past →