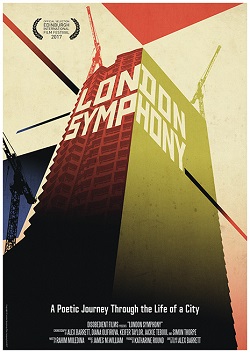 In 2014, I was contacted by Alex Barrett who was raising funds for his very interesting film project about London. The project become a reality and was released to considerable success.  The film was nominated for the Michael Powell Award for Best British Film at the Edinburgh International Film Festival 2017, and was the winner of four categories in the Silent London Poll of 2017: Best Silent Film DVD/Blu-ray release, Best Silent Film Theatrical Release, Best Modern Silent Film of 2017 and Silent Hero of 2017 for the film’s director and editor Alex Barrett.

London Symphony is a silent film which offers a poetic journey through the capital. It is directed and edited by Alex Barrett, and features an original musical composition by composer James McWilliam. The film is a contemporary take on the ‘city symphony’, a genre of that flourished in the 1920s and consisted of works that attempted to build poetic portraits of city life.

London Symphony is celebration of London’s culture and diversity and footage for the film was captured in over 300 locations around every borough of London.

During the making of the film, Alex Barrett took a wide range of photographs, some of which will be featured in photography exhibition at Southwark Cathedral. The exhibition runs from the 10th February – 2nd March in the Cathedral Refectory.

If you would like to see the film, you will be able to attend a special, candle-lit screening of London Symphony which will take place in the nave of the Cathedral on February 23rd. This screening is part of the film’s on going UK theatrical tour, which was launched with a sold out screening at the Barbican Centre in September 2017.

London Symphony will also be released in the UK on DVD through New Wave Films on Monday February 12th 2018. The DVD is available to pre-order from all good stockists, including Amazon here and direct from New Wave Films here .

By isleofdogslife in Art Life on February 7, 2018.
← A ‘Rare’ Award for Mudchute Farm The Strange Story of the Chinese Junk Keying at Blackwall in 1848 →