Regular contributor Laureen Katiyo kindly sent some photographs of the celebrations from the Feast of St George event which took place in Trafalgar Square last weekend. Like most people, I tend to be quite ambivalent to the celebration of the patron saint of England but why is this?  In some ways we seem to be happier celebrating other countries festivals like St Patrick’s Day.

To determine whether this is a more recent phenomenon, I decided to look back into the past through newspaper reports and found this apathy to St George’s Day has a long history.

In 1839, the following writer tries to build up the day.

A man may be, in the fullest sense of the word a ‘citizen of the world,’ and still preserve that veneration for the important festivals of his native soil — of which, indeed, every Englishman should be proud, and with which must necessarily be associated many early and joyous reminiscences. We fervently hope that whatever dimness may this year have been cast upon the lustre of St George, will be dispelled by the halo which shall arise from the celebration of the 23d April, 1839.

Even the Victorians were neglectful as this report from 1885 describes.

It is a matter of known fact that of late years St. George’s day bas been neglected through the complete insouciance of the Englishmen. While the Scottish and Irish have stood forward and insisted on their Patron Saint’s Days being annually honoured the name of St. George has not been often heard.

A report from 1928 turns this apathy into a virtue, it is all because of our natural modesty.

An Englishman considers it is bad form to boast about his work, about this country, or about its achievements. Even on St. George’s Day, the festival of the nation’s patron saint, and the birthday of Shakespeare, the world’s greatest poet, the English people are very subdued, as a rule, in their celebrations.

Another problem is St George himself, he seems to have a mysterious past which had no obvious links with England, it is generally accepted that St. George was a soldier who was tortured and killed for his Christian faith in around AD 303. After this stories about his strength and courage soon spread throughout Europe. The best-known story about St. George is his fight with a dragon, it was believed that it was the 12th century Crusaders however who first invoked his name in battle.

King Edward III made him the Patron Saint of England when he formed the Order of the Garter in 1350, and the cult of the Saint was increased by King Henry V, at the battle of Agincourt. Shakespeare famously included the rallying call by King Henry V with the famous phrase, ‘Cry God for Harry, England and St George’.

Perhaps one of the major issues is the tendency for English people to consider themselves as British first then English. It has been very common to many people in the past for people to say that they are British rather than English because they are part of Great Britain or United Kingdom.

So why the renewed interest in St George and Englishness? Ironically it is possibly the greater independence of Wales, Scotland and Northern Ireland in recent times that has led England to reconsider its role and English people to find their own identity. The various events on St George’s Day is part of this movement, whether these events can overturn centuries of apathy is a different question.

After we have had a very quiet period in West India Dock, we welcome the arrival of the 55.17 metre superyacht, Lady A. The Jon Bannenberg designed yacht was launched in 1986, built-in Japan by Nishii Zosen-Sterling and named the Southern Cross and was originally owned by disgraced Australian millionaire Alan Bond.

It is widely believed the yacht was bought in 2015 by Lord Sugar but has recently been put up for sale for around £13 million pounds. 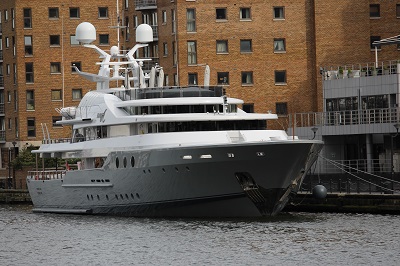 As usual in the secretive world of superyachts, it is difficult to find out who are the owners and why the yacht is visiting West India Dock.

The yacht had a major refit in 2015 and is considered one of the most distinctive yachts afloat. the yacht can accommodate 12 guests in a master stateroom, four doubles and one twin guest cabin. The sundeck design has a seated bar, Jacuzzi, and sun awnings with two private lounges at the foredeck. 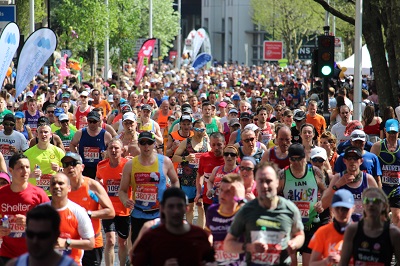 The Isle of Dogs is thrust into the national and international spotlight once a year with the arrival of the London Marathon. In the week before the race, new boardings appear on the roadside and metal barriers arrive to be placed along the route. 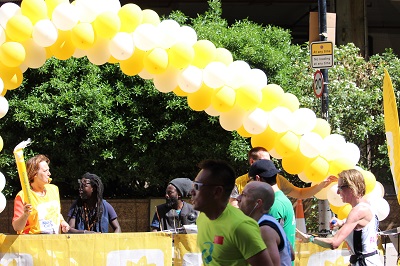 On the morning of the race, volunteers and charities take their spots along the route in eager anticipation of yet another carnival of running. People were enticed outside with the wonderful warm weather and began to take their positions along the route . The spectators on the west of the Island have the benefit of watching the runners going down Westferry Road and returning via Marsh Wall before the runners head into Canary Wharf.

The elite wheelchair races are the first to start and finish and they raced around the Island at great speed, in an exciting finish Britain’s David Weir won his eighth London Marathon in the men’s wheelchair race.

The men’s race was another win for Kenya with Eliud Kipchoge , Ethiopa’s Tola Shura Kitata was second and Britain’s Mo Farah finished third in a new British record. 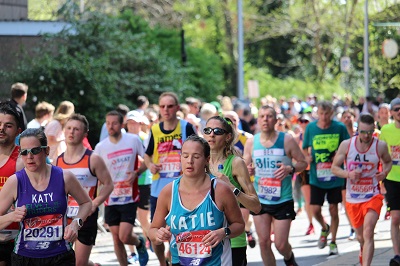 After the elite races, the crowds on the Island get bigger with family and friends of the runners of the mass race taking their places along the route, other spectators come out in large numbers to offer support to the runners who face their own particular challenges, it is the mix of serious runners, celebrities, fancy dress runners and fun runners make the marathon the great success it is. Many of the runners run for their favourite charity and since 1981, competitors in the race have raised nearly 60 million pounds for various charities.

Eventually the large mass of runners dwindle down to smaller groups and spectators begin to drift away, the noise and excitement of the big day is replaced by quietness with the occasional lorry appearing on the course to take down various structures and the cleaning department picking up the tons of litter.

Congratulations to all those who took part and all the volunteers who make the London Marathon, the special event  it  is.

It is safe to say that although Canary Wharf is often in the news, the rest of the Isle of Dogs is seldom the focus of national and international interest. However this always changes on the day of the London Marathon when the normally quiet streets are filled by thousands of runners and thousands of spectators.

The race tends to attract the world’s greatest men and women marathon runners and this year is no exception. 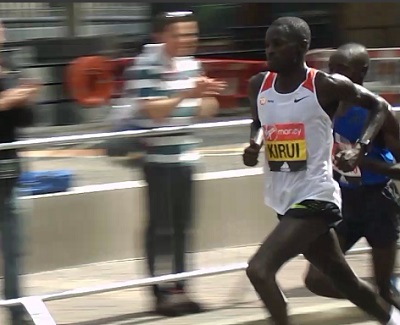 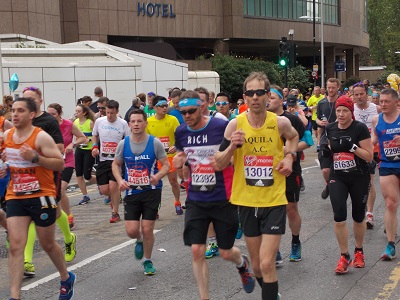 However, for many people the race is a personal challenge and an opportunity to raise considerable amounts for their particular charities. The large number of fancy dress runners add to the carnival aspect of the race.

The race enters the Island at Mile 15 when it comes onto Westferry Road , this is a long road down the side of the west side of the Island. Lots of shops and a few pubs here and most of the spectators will be locals.

Just before Mile 16 you will pass the Docklands Sailing and Watersports Centre  which leads into the Millwall Docks and is often filled with small yachts overlooked by the old cranes standing next to the dock.

The sweep around the bottom of the Island takes you near Island Gardens which has wonderful views of Greenwich and the river. Here is also the entrance and exit of the Greenwich foot tunnel.

Going up the East Ferry Road to mile 17 you will see the greenery of Millwall Park on the right and the Mudchute DLR on the left.

Just past Mudchute DLR you will see the entrance to Mudchute Farm and Park , one of the  biggest inner city farms in Europe.

A little further on you have Asda on the right and Crossharbour DLR on the left, then the route takes you further up to Limeharbour adjacent to Millwall Dock  and then onto Marsh Wall.

A short run down along Marsh Wall to South Quay DLR, is followed by a run past the International Hotel and Novotel to mile 18, there is a quick switchback into the Canary Wharf estate for Mile 19.

Canary Wharf has become a popular watching base for many spectators due to its proximity to the transport system and over 200 shops, bars and restaurants.

The race then goes out to Poplar to begin the long stretch home.

Some of the benefits of watching the Marathon on the Isle of Dogs is that you can actually watch in comfort rather than being part of the massive crowds in Greenwich and Tower Bridge. You also have easy access to the transport system and access to many pubs, bars and restaurants. To make sure you do not miss any excitement, here is the time guide.

Good luck to everyone taking part in the race and everyone who contributes to one of London’s greatest sporting events.

Since the creation of Canary Wharf, the arts have played an important role in the developing the 128-acre Estate. Canary Wharf has one of the UK’s largest collections of public art, with more than 70 permanent works by over 50 artists. 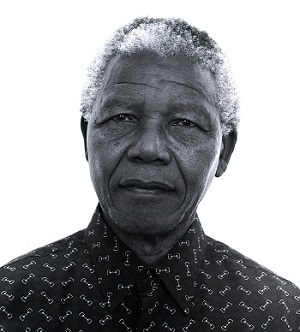 On the 16th of April, the estate will hold a major exhibition of photographic images, Canary Wharf celebrates 50 years of the Association of Photographers by hosting an exclusive exhibition, AOP50, a major retrospective comprising of iconic images by some of the world’s most well-known and respected photographers from the past 50 years.

Formed in 1968 by a group of leading advertising and fashion photographers, AOP is today one of the most prestigious professional photographers’ associations in the world which has played a major role in promoting photographers’ rights and copyright protection.

In recognition of this important milestone, the exhibition, curated by leading photography expert Zelda Cheatle, will present a collection of images that define 50 years of the AOP. Photographs have been selected to illustrate the impact, diversity and quality of work by AOP members since 1968, including Nadav Kander, Duffy, Tim Flach, Tessa Traeger and John Claridge.

The exhibition covers a wide range of subjects from celebrities and stars to photographs documenting some of the world’s turning points, including wars, famine and humanitarian disasters. The exhibition will be separated into decades and grouped around Advertising, Editorial, Still Life, Portraiture, Fine Art and Landscape genres.

The exhibition will be free and held in the One Canada Square lobby in Canary Wharf.
If you are interested in photography and would like to see a number of images you may recognise and some you may not, it should be worth taking a look around the exhibition.