New Addition to the Memorial Area in Island Gardens 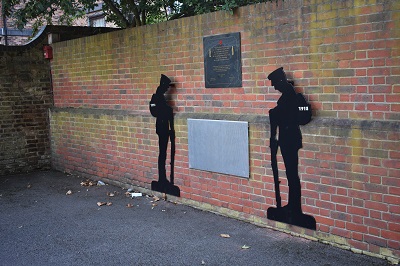 Tucked away in a lovely quiet corner of Island Gardens is the Memorial Area, The Friends of Island Gardens group have worked with the local council to create this small area within the park which is a place that people can pay their respects to the many who have sacrificed their lives.

Unlike many places, there are not a lot of monuments to those who died in the two world wars on the Isle of Dogs. The main reason is that the Island itself suffered from considerable damage from bombing in the Second World War and has had extensive redevelopment since the 1980s.

The Memorial area in Island Gardens has become a community place of remembrance at certain times of the year but especially on a date near Remembrance Sunday. This years event will be held on Friday 9th November from 10.30 am and will have four schools sending children and there will be a bugler in attendance.

Many thanks to Eric Pemberton and Friends of Island Gardens for the photographs and information.

Last year, I had a look around The Forge which is one of the few buildings that survive from the great Victorian shipbuilding industry in Millwall.

If you would like to look inside this fascinating old building it will open during the Open House weekend on the 22nd and 23rd September 2018. Recently the Forge was turned workshops and gallery space for Craft Central.

However, many original features remain and The Friends of Island History Trust will be on hand to explain about the building and the surrounding area.

The Friends of Island History Trust have recently become a recognised charity and will show a variety of images and prints that celebrate the remarkable history of the Isle of Dogs.

Emrys who redesigned the Forge for Craft Central will be exhibiting their innovative designs, shortlisted for several awards and commended for a New London Award. 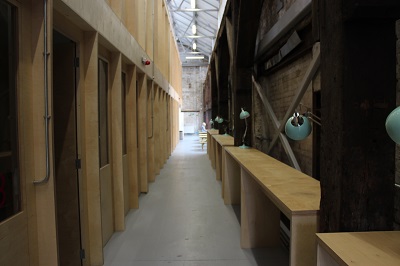 There will be a Glass at the Forge exhibition with twenty international glass & metal artists in The Gallery.

Darren Appiagyei, one of a new generation of woodturners, will be showcasing a range of his work.

There will also a Pop-up cafe available.

Getting to the Forge

Craft Central at The Forge is a five-minute walk from Mudchute DLR which connects at Canary Wharf with Bank and Stratford. The Forge is close to Masthouse Pier for Thames river bus services from Central London and Greenwich. It is also a short walk from the Greenwich foot tunnel.

After the visit from the Lord Nelson, we have the delight of a visit from her sister ship STS Tenacious. The Tenacious is a wooden sail training ship which was specially designed to be able to accommodate disabled sailors. Launched in Southampton in the year 2000, it is one of the largest wooden tall ships in the world. It is 65 metres long with a beam of 10.6 metres at its widest point.

The Tenacious and the Lord Nelson  are owned by the UK-based charity the Jubilee Sailing Trust who have for many years have pioneered sailing for the disabled. The Jubilee Sailing Trust became a registered charity in 1978 and was the brainchild of Christopher Rudd, a school teacher and sailor who wanted to give the disabled children he taught the same experiences his able-bodied students had.

Since its launch Tenacious has taken nearly 12,000 people sailing of these 3,000 were physically disabled and 1,000 were wheelchair users. 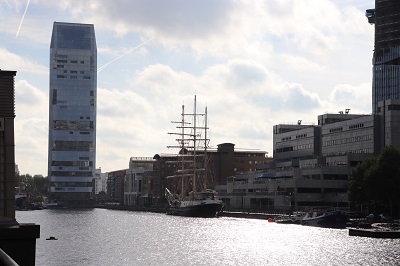 With the Totally Thames festival in full swing, there are plenty of interest on and near the river, St Katherine’s Dock has a number of historic boats in the dock including the Havengore and Gloriana.

Many thanks to Eric Pemberton for the photographs of the Tenacious coming into West India Dock.

Regular readers will know that I am fascinated by the Trinity Buoy Wharf area which is one of the most unusual places in London. The area has a fascinating history,  The Corporation of Trinity House were a company responsible for buoys, lighthouses and lightships and in the early 19th century established Trinity Buoy Wharf as its Thames-side workshop where wooden buoys and sea marks were made and stored. Eventually new buildings were constructed during the Victorian period including the Electrician’s Building and an Experimental Lighthouse whose roof space housed a workshop for the famous scientist Michael Faraday. 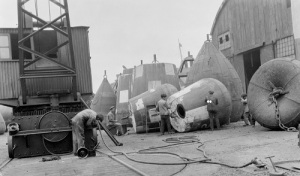 By 1910 Trinity Buoy Wharf was a major local employer, with over 150 workers on the site and carried on until 1988 when it finally closed. In 1998, Trinity Buoy Wharf which was then an empty, derelict site was taken over by The Trinity Buoy Wharf Trust which began to develop the area as a centre for the arts and creative industries and the location is now home to a working community of over 350 people.

As part of the 20th anniversary celebrations, Trinity Buoy Wharf will explore the site’s rich maritime history of Trinity Buoy Wharf; its buildings, lighthouse and the Thames, River Lee and their banks nearby with a night of special events will take place including specially installed light projections, art shows, films, images, stories and guided tours.

One positive aspect of the trust taking over the site was that it has preserved many historical aspects of this important part of London that may have been lost. If you would like to see how this was achieved, why not visit the Anniversary party on the 26th September, attendance will be free and there are plenty of cultural delights to enjoy.

After being away for a couple of weeks exploring the far north of Europe, it is nice to return and see the familiar masts of the STS Lord Nelson in West India Dock. By a strange coincidence I had a conversation while I was away with someone who had worked on the Lord Nelson for some years. As they say it is a small world.

The Lord Nelson was the first tall ship that was purpose-built with the aim of integrating disabled with able-bodied people. The ship was the fulfilment of the vision of JST’s founder, Christopher Rudd who believed that physically disabled people should be able to sail alongside able-bodied people as part of the crew.

The Lord Nelson sailed on her maiden voyage in 1986, Since that voyage, the STS Lord Nelson has sailed 461,943 Nautical Miles and taken nearly 29,000 people to sea. Of these, 10,500 people were physically disabled and more than 3,500 were wheelchair users.

One of the most remarkable aspects of the ship is that Lord Nelson’s has many facilities for disabled crew including flat wide decks, powered lifts, speaking compass, Braille signage and bright track radar for visually impaired crew members.

However, the whole purpose of these facilities is to enable the disabled crew to work side by side with the able-bodied crew.

Between 2012 and 2014, the Lord Nelson undertook its greatest challenge by completing a voyage around the world visiting 7 continents and 30 countries. Whilst in Australia and New Zealand she raced in tall ships races and also carried out an Antarctic Expedition.

The Lord Nelson and her sister ship, the Tenacious are regular visitors to West India Dock and both ships are a wonderful reminder of what can be achieved by fulfilling a vision of providing opportunities to people with a wide range of abilities.