Lizzie Flowers and the Family Firm by Carol Rivers 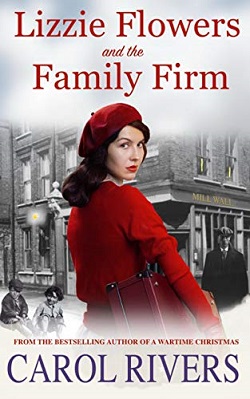 Regular readers will know that I often try to find books that feature the Isle of Dogs, it is often surprising just how many have featured the Island. Much rarer is writers who locate a series of books on the Island, one writer that does is best-selling author Carol Rivers and I was delighted recently to receive a copy of her latest book, Lizzie Flowers and the Family Firm.

Carol’s gritty and heartwarming East End family dramas are greatly influenced by her grandparents who lived in Gavrick Street and then Chapel House Street on the Island. The books are widely praised for their realism and have appeared regularly in many bestseller charts and have a loyal readership in the UK and increasingly in the United States.

Lizzie Flowers and the Family Firm is the third of the series of Lizzie Flowers dramas, the first in the series was Lizzie of Langley Street which took place in the period of the First World War followed by The Fight for Lizzie Flowers which is set in the early 1930’s. Lizzie Flowers and the Family Firm begins in 1934 and finds Lizzie seeking some peace, after some traumatic experiences, not least overcoming the intentions of East End villain Leonard Savage. At last things appear to be going well for Lizzie, Now not only does she still run the shop of Ebondale Street, she has also built up a successful bakery store with the help of Jenny her manageress.

However, on a personal level, things are not running smoothly, Lizzie’s one true love, Danny, had asked her to move away from the Isle of Dogs to his fancy new showroom in the West End, but Lizzie determined to ensure her family and friends survive refuses, so Danny and his adopted son Tom, move away, leaving Lizzie heart-broken.

To add to her worries, Lizzie spots a woman holding a baby outside the bakery one morning, she cannot believe that this downtrodden woman is her friend Ethel carrying a baby. Ethel collapses into Lizzie’s arms and beseeches Lizzie to help her.

Despite opposition from all around her, Lizzie is determined to take over the lease of the Mill Wall, a pub renowned for its ladies of the night and rivalry. Lizzie gives her husband Frank the opportunity to redeem himself by running the pub and ensuring that its clientele remain ‘clean’ and free from the ladies of the night frequenting it. Will Frank be able to maintain his sobriety to show Lizzie and his family that he has turned over a new leaf.

Lizzie continues to do what she does best, nurturing her family and friends so they have a good life on the Island, however, with the Mill Wall Pub, the bakery and the shop, has Lizzie bit off more than she can handle ?  A new villain on the block, “the Prince” certainly thinks so, and is threatening both her family and her livelihood. When there is a fire at the bakery resulting in the death of the cook Madge and severe burns to Jenny, Lizzie is worried she will lose everything.

What sets Carol’s books apart from many others of the type is that she creates believable characters who inhabit an Island that is still reliant on the docks and where family is still of great importance. Whilst the extended families were a great source of support, sometimes loyalties were divided that often led to conflict. This is another characteristic of Carol’s books, she honestly portrays characters who have gone off the rails and how families have to deal with a series of setbacks.

Carol’s books pays tribute to the strong characters, often women who kept families together through adversity. Lizzie Flowers is one such character who is full of true East End grit who will not be defeated by life’s injustices and hardships.

By isleofdogslife in Literary Life on January 28, 2019.
← On the Docks Film Premiere at the Museum of London Docklands The Virginia Settlers Monument in Blackwall →