After all the recent activity with Tall Ships , West India Dock welcomes a very different type of ship with the arrival of the HMS Westminster. The Type 23 frigate will be moored in London for a few days and will undertake a number of engagements .

The HMS Westminster was built in the famous Swan Hunter yard in Tyne and Wear and launched in 1992. The 133-metre ship, last visited West India Dock in 2014, since then the ship has had a refit and more recently has just returned from the  NATO training exercise, Exercise Baltic Protector, in the Baltic region. 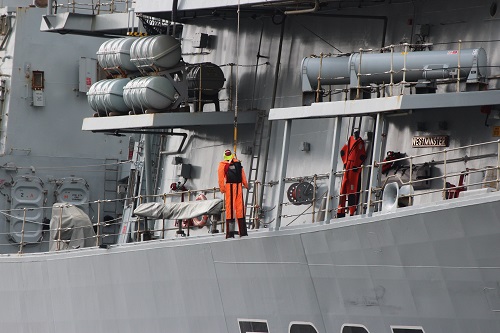 Joining ships from Poland, Turkey, Spain, Denmark and Germany, HMS Westminster was part of the Standing NATO Maritime Group One (SNMG1) task force led by the US Navy under Rear Admiral Edward Cashman. While returning from the Baltic, HMS Westminster also took part in NATO anti-submarine exercise Dynamic Mongoose in the North Atlantic near Norway.

On the 6th August, HMS Westminster  will be open to members of the public so that people have an opportunity to experience life on board a warship. Open from 9am until 4pm ,tickets are available on the hour between these times. Tickets are free but must be obtained in advance from eventbrite.co.uk here 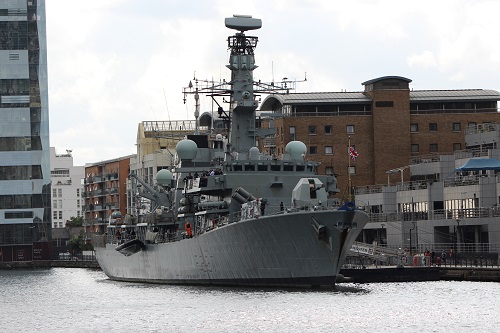 Whilst in London on Wednesday 7 August, the crew will exercise their ‘Freedom of the City’ of Westminster. This is the highest honour any city can bestow upon a military unit and gives them the right to march through the city with drums beating, colours (flags) flying and bayonets fixed (fitted to rifles).

By isleofdogslife in Dock Life on August 6, 2019.
← The Gulden Leeuw Tall Ship in West India Dock Electric Power in the Isle of Dogs →