Walking around the Island, a familiar tall ship loomed out of the autumn gloom, it was the Stad Amsterdam which has been a regular visitor to West India Dock over the years.

The Stad Amsterdam (City of Amsterdam) is a three-masted clipper that was built-in Amsterdam in 2000, the ship was built when Frits Goldschmeding, founder of the Randstad employment agency and council of Amsterdam decided that the Dutch needed to build a tall ship to represent the historic maritime nation.

The ship was designed by Gerard Dijkstra basing his design on the 19th century frigate Amsterdam, however although she looks like 19th Century ship she is fitted with modern materials which means that she was fast enough to win the 2001 Cutty Sark Tall Ships’ Race. 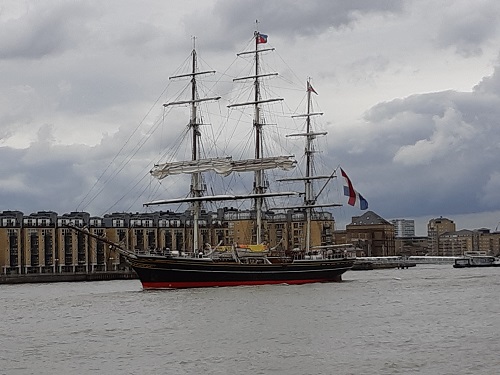 The Stad Amsterdam is used as a training ship but also undertakes luxury cruises and adventure holidays all over the world, in 2009 she was used by Dutch Television to retrace the second voyage of the HMS Beagle.

She is a fully rigged tall ship with an overall length of 76 m, height of 46.3 and over 2000 square metres of sail. She usually operates with a crew of 32 and can accommodate 120 passengers for day trips and 58 for longer journeys.

After visiting London, the ship will visit Hamburg and Amsterdam before going in for a refit to prepare the clipper for an around the world  trip starting in 2020. The SDG World Tour will start in August 2020 and will take two years to complete.
The main goal of the tour is to help achieve the seventeen Sustainable Development Goals (SDGs) by increasing knowledge and awareness around the world. The tour has 17 stops, one for every SDG, and at every stop many events will be organised and best practices will be shared. The SDG World Tour is endorsed by the UN.

By isleofdogslife in River Life on September 30, 2019.
← Hay Barges on the Thames Remembering Steam Wagons in London →