Memories of Prefabs on the Isle of Dogs

The recent post by George Donovan mentioned for a while he lived in a Prefab, I was made aware that not everyone knows about Prefabs, so I thought I would provide a short guide.

Prefabs (prefabricated houses) were a major part of a plan to address the United Kingdom’s post–Second World War housing shortage. The idea was to build 500,000 prefabricated houses, with a planned life of up to 10 years, within five years of the end of the Second World War. The plans changed because around one million new houses were built between 1945 and 1951 but only about 150,000 were prefab houses. 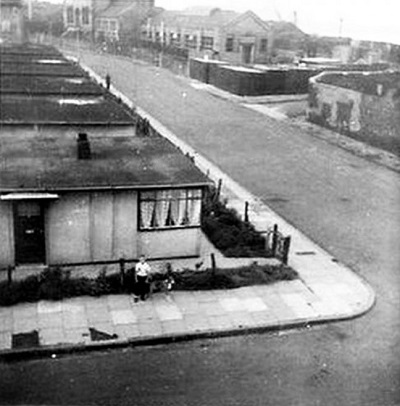 On the Isle of Dogs, a number of Prefabs were built to deal with the desperate shortage of housing on the Island. The main areas of prefabs on the Island were in North Millwall, around Stebondale St, and the Glengall and Samuda area.

George gives some insights into the joys and drawbacks of living in a Prefab.

Living in the pre-fab was quiet nice really, they were well designed and very functional. The kitchen’s had fitted units with a gas powered refrigerator made by The Press Steel Company of Oxford. They did have a couple of problems though that came to light on residence. One was that they housed rodents [Mice]. You could hear them scampering in between the walls. They may even have been there from the day of installation having nested whilst in storage. The remedy was two cats.

The other problem was flies. Now that was due mainly because of the derelict surroundings that were prevailing at the time. I found the solution to that too. Next door to the Police station on East India Dock Road at the top end of Chrisp Street-was this sort of ‘junk’ shop run by a man and his son named Wells. They got into selling ex WD army surplus stuff. I still have a Trenching Tool that I bought from them. You just walked into the shop and browsed around and I discovered these small canisters. They were shaped like a present day oxygen bottle about two and a half inches long. At its end there was this spur like nipple. I got to learn that they were issued to the army for use as personal hygiene. The contents were under pressure and you snapped the nipple off and sprayed [I suppose the contents were some form of DDT] under your arm pits etc:

So in the prefab, I would be the last to go to bed and I would use one of these in the kitchen to kill the flies. First one up in the morning would do the sweeping up.

I read some time back that there was a community living in South London still living in Prefabs and are fighting the council who want to demolish them. There is one as a museum piece at the BWM at Duxford, the same type that we lived in.

Debbie Levett, the Secretary for Friends of Island History Trust let me know recently that a number of members of the Trust have assisted Jane Hearn to record some of the history of the Islands prefabs. Jane is collating the history of the countries prefabs for the prefab museum website which is a fascinating look back to this post war phenomenon.

A few years ago, I wrote a post about the Millwall Poultry Club which was based on an article that was published by the Picture Post in 1939.
It was a fascinating article about the club that used to meet at the L.C.C. Mens’s Evening Institute, in Glengall Grove. Leading lights of the club were President, Mr W. Powell-Owen, Charlie Sieloff, Dave Hedley, Mr Dave Love, Mr W White and Mr S Hayward.

It was a pleasant surprise to be recently contacted by George Donovan who remembers some of the people involved and was interested in raising poultry himself. George very kindly wrote down some of his memories for us to enjoy 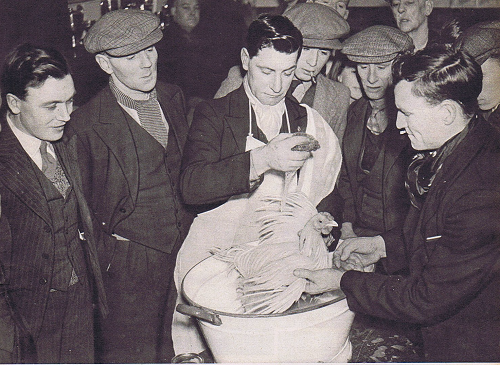 My wife and I once lived in Stebondale Street Millwall when we married [Christ Church] in 1948, then on to here in Essex via Prestons Road in Poplar and Dagenham. When we lived in the prefab in Stebondale Street, the rent book was held by my Mother-in Law, and it was with her permission that I built the Chicken run from the floor-boards of the bombed out pub a few doors down. I remember lifting the cork lino up in the upstairs club room, and they were as new as when first laid. My wife’s brother, George Mahoney who lived across the road in Parsonage Street, encouraged my interest in poultry keeping, for it was his father-in-law Charlie Sieloff who lived with them that was the principle. One of the pictures I saw on the web was Charlie in his backyard. He was keen on Bantam’s and a breed known as Wyandotte’s.

In 1948, My wife’s mother, a widow, agreed that we could live with her in her council rented Pre-Fab until we were able to get accommodation of our own, and we were happy to do this. Having an interest in poultry it wasn’t too long before I was able to build a chicken run in the back garden and housed it with 4 ‘point of lay’ birds. Within weeks the birds began to earn their keep and fresh eggs were often on the menu. All was going well for many months until it became noticeable clear that egg production was beginning to become a little erratic and there didn’t appear to be any obvious reason for this. Being a member of the local Poultry club I approached the ‘instructor’ who after some deliberation concluded that the birds were being troubled at night by ‘Red Mite’. The cure was that I should go to the local chemist and purchase some ‘Tincture of Nicotine’ and just before the birds went to roost paint their perch with the liquid so that when the birds perched the heat of their bodies would vaporise the solution which in turn would impregnate their feathers killing off the mite. Armed with this remedy I went to the chemists (Timothy Whites who had a shop in Crisp Street) only to be told that I needed a ‘Certificate to Purchase’ to be obtained from the local Police Station as Nicotine was a registered poison. That didn’t seem to be any problem, so along to the local ‘nick’ I went and presented myself to this ruddy faced walrus moustached desk sergeant, who having got hold of the poison book, began the formalities of asking the necessary whys and therefore’s. 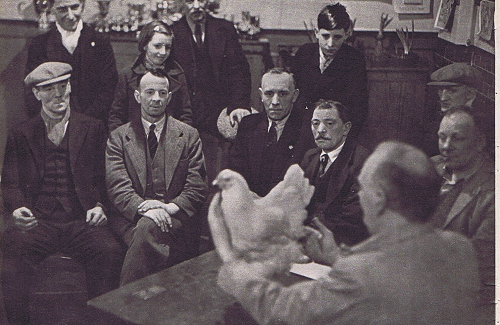 All seemed to be going well until we got to the address part.
“And where do you live sir?
And is this your own property—No, Its council owned and rented.
And are you the tenant sir—No, I live with my Mother-in Law”.
I can see that man’s face now as he put down the pen and stood back off his stool, “Your living with your Mother-in Law and you want to buy poison——!!!!!!!!.

Some years ago I met up with this gentleman who had a small museum over in Kent. He used to write for the Poultry World magazine and was a lecturer on poultry at some college. He’s a renowned Poultry judge too. His name is Fred Hams. He knew Charlie Sieloff and Powell-Owen.

Many thanks to George for his memories and some insight into a now lost world of poultry keeping, although if you want to see some rare breeds of poultry, you can find them at Mudchute Farm and Park.