Masks in the Past 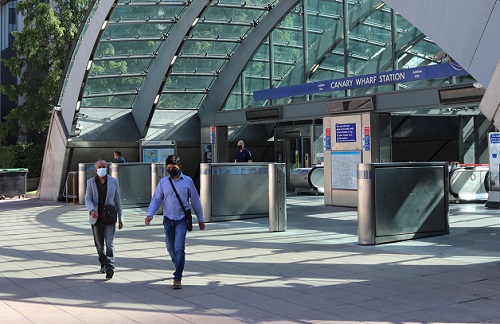 Wandering around the Island, it is noticeable that a large number of people are wearing masks as they go about their business. Although many people at the beginning at the pandemic had considerable reservations about wearing masks, it is now accepted by most people that they do offer some protection. But what about in the past ? I decided to do some research into past outbreaks especially the Spanish Flu pandemic in 1918/1919 and found some familiar themes that we are facing today.

Newspapers received by the last mail from London contain reports of a conference called by the Institute of Hygiene to consider “influenzas and its Prevention.”

Sir Malcolm Morris directed attention to a number of points on which light was needed. He expressed the opinion that alcohol was not essential either for the prevention or the treatment of influenza.

Speaking of the precautions recommended by the Local Government board, he said the solution of common salt and permanganate of potash for washing the nostrils and throat was a most horrible mixture. He had found a solution of colloidal silver beneficial.

Sir St. Clair Thomson said the disease was splashed on us by people talking, laughing, coughing, and sneezing at any body within ten feet of them. People known to have the disease should be isolated, Persons who in a omnibus or tube who coughed without putting up their hands, or sneezed without putting up their handkerchief should be prosecuted for indecency.

Sir Kingsley Wood said If we were to grapple with the disease we have to spend a great deal more than £50,000 a year on medical
research.

In Poplar a gargle or douche was being distributed to all who liked to apply for it, this example might well be followed by other municipalities.

Dr. Carnegie Dixon said He was afraid experience did not yet sufficiently show whether masks were useful or not. His own opinion was that they were useful.

Dr. Hector Mackenzie said The wearing of masks for the general public he considered unpractical.

Dr. Kirkhope, of Tottenham, was inclined to think alcohol stimulated the activities of the body in resisting disease. 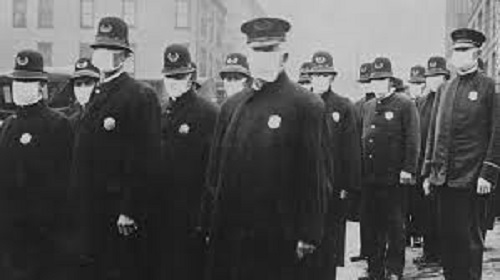 “One of the simplest precautions,” writes the medical correspondent of the London “Times,” “is to wear a small mask made of gauze and tied
across the mouth. Those who have dared to do this have largely escaped infection because the danger germs are caught in the mask, and so do not penetrate to the throat. The mask must cover the nose.” American experience confirms this advice. One, N F. Ostberg, writing to the
newspapers, states: “I have been in the thick of the epidemic since March last year in different countries in Europe, and also in America. I have had the opportunity to judge of the efficiency of various preventives and remedies, such as antiseptics, inoculations, and drugs, and can truly say that in Europe and America these have had no effects whatever in the stamping out of the disease. A few days before my arrival in San Francisco the epidemic broke out, and it was allowed to spread without hindrance until the ravages were so bad that compulsory wearing of gauze masks was decided on. Almost immediately the progress of the influenza was stopped, the number of cases decreased daily, and after about a month the disease was stamped out and the masks abandoned.

The influenza epidemic is Britain is not abating. There were 138 deaths in Edinburgh last week, of which 90 were from pneumonic influenza.
The “Daily Mail’s” medical correspondent estimates that the deaths from influenza last quarter of 1918, totalled 175,000, largely young adults, involving an economical loss of £130,000,000.
Doctors are increasing their belief that the, wearing of masks affords protection against the disease:, 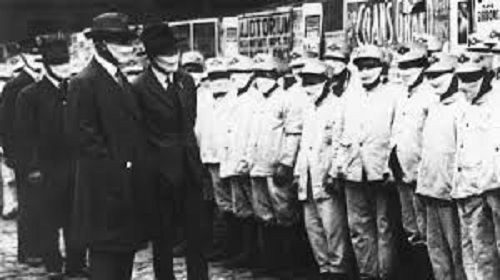 The Fresh Wave in February was Expected : Masks Recommended when in contact with Infection

The following observations by the medical correspondent of the London Times printed on January 31,

Indications point to a fresh wave of the influenza epidemic. There is nothing surprising in this; indeed, the thing has been foretold on many occasions. What is interesting is that this new wave corresponds in time, as did the last one, with a notable break in the weather.
The new wave seems to be of considerable virulence, though whether or not it will last any length of time remains to be seen. The fact that it follows so closely upon the earlier waves may serve to limit it to quite small proportions, since presumably many persons have acquired a degree of resistance to the infection. On the other hand, optimism is dangerous and precautions should not be neglected.

The disease, as has been indicated again and again, is contact-borne. Consequently contact with persons who are affected should be avoided if possible; a mask gauze (a handkerchief serves very well) should be worn. It is better to avoid crowded places and hot places. Chills should also be avoided very carefully, but fresh air is most valuable.

Fierce controversies have raged about the use of alcohol. The facts would seem to be against those who declare that it is a useless. Indeed, the opinion of many of those who have been prescribing it recently it that it forms a most valuable aid to treatment.

In a, memorandum issued by the Local Government Board, the use of masks during the influenza epidemic is not advised. An exception Is made in the case of nurses who, it is stated, should wear goggles, as infection is receivable through the eyes.
The practice of spraying halls is said to be of doubtful value, und creates a false sense of security. The golden rule is the avoidance of fatigue, alcoholism, cold and crowds, and the gargling of the throat and nostrils with a teaspoonful of salt In a pint of warm water, adding a few potassium pormanganate crystals.

The serious view taken by medical authorities regarding the risk of epidemics in the , coming winter is indicated in a letter to
“The Times” by T. H. Sanderson- Wells, M.D., F.R.C.S., suggesting the use of gauze masks, covering the mouth and nose in three or four layers of gauze to prevent the dissemination of germs by the infectious, and the inspiration of floating organisms by the healthy.

He is echoing the fear expressed in the “British Medical Journal” which says: “Unless effective measures are promptly taken we can foresee with the approach of winter a’ state of affairs in respect of contagious and infectious disease which may prove more devastating than the blitzkrieg.”

May Order Masks As Flu Check

To prevent the spread of the influenza epidemic in Britain, everybody may be ordered to wear gas masks. The Ministries of Health,
Labour, and Aircraft Production are reported to be making special arrangements to stop the spread of infection in British war factories.
Effective preventive measures are being sought by health and medical officers in factories where production has been affected.
Some experts who consider gas masks too uncomfortable and too great a hindrance at work, suggest that gauze masks should be worn.

The Government has instructed the British Medical Research Council to proceed with tests to prove the value of the new “cold cure” — the drug patulin.

Controversies over wearing masks, contradictory medical advice, strange and sometimes dangerous home remedies. All this seems very familiar and an illustration that nothing is really ‘new’.

Support for The Space on the Isle of Dogs

The Isle of Dogs has never been a place that is considered a centre of the Arts or Culture. However since 1996, The Space at the bottom of the Island has provided inclusive and ambitious theatre in a converted church.

During lockdown, the Space run a Locked Down, Looking Up online programme which supported their practitioners, participants and audiences. Over the course of 16 weeks, they produced and staged 10 play readings, 30 theatre workshops, 16 theatre club sessions and 2.0 Fest, a special festival of 8 duologues 3 of which have won OnComm awards. 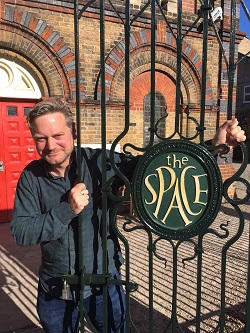 Like many other theatres, due to the pandemic they face a very uncertain future and have launched a crowdfunding promotion to raise funds. The theatre has had to deal with decreased income from traditional ticket sales, venue hires and rent from their cafe/bar. As a result, the Space now faces risks that could result in permanent closure.

The Space is due to celebrate 25 years as a theatre in September 2021 and any donations will provide a lifeline till performances get back to reasonable levels.