Memories of the Island from Richard Jones and Ada Kay

Last year I was contacted by David Jones who had written a book about his early life and gives some real insights into a child growing up in the 1930s and 1940s.

The book entitled “Smith of Lambeth,” tells the story of how his family, paternal grandfather, Richard Jones, and his parents, brothers and sisters, left their home in Wales in the 1880s and settled on the Island. His grandfather Richard Jones, and two of his brothers, William and Edward soon showed their sporting prowess playing for Millwall Football Club who were then based on the Island. Richard later gained international honors for Wales.

David’s father’s family kept a green grocery shop on Glengall Road in which his paternal grandmother, née Skeels, worked. His mother’s family, née Draper, lived on Glengall Road. There were 11 children and their father was an itinerant dock worker. David’s parents, aunts and uncles, on both sides of my family, were born on the Island as was David in 1934. Not long afterwards, David’s immediate family moved to New Cross in South London but the Jones family maintained a large presence on the Island.

If you would like to find out more about the Jones family and life on the Island in the early 20th century, I am delighted to report that David and his family have made three videos available on YouTube which feature David’s father Richard and Auntie Ada Kay reminiscing about their life on the Island.

The videos were made in 1992 when the interviewees were in their 80s, in David’s house in Leonia, New Jersey. Richard, and Ada were on a rare holiday for both of them. The interviewer was Louise, a member of David’s family.

David’s father was born in 1904 and even remembered a  Zeppelin being shot down over the Island in the first World War. The interviews cover a wide range of subjects from Ada being run over by an horse and cart as a child to facing the blitz in the Second World War.

Listening to the memories of Richard and Ada was a reminder of how things have changed to a remarkable degree over the last century. Many of their memories of their childhood related to playing outside in the street, it is difficult for people to understand today that the streets of the Island and almost everywhere were a massive playground and entertainment area. The reason why the kids played in the streets was of course there were very few cars and the only dangers were the horse and carts but they were easily seen and avoided (although Ada did have run in with one).

The street was also the source of entertainment with various traders and tradespeople coming down the street selling their wares. Richard and Ada remember the Muffin Man, organ grinders and Aunt Sallies who were men who dressed as women to sell stuff off their barrows.

Richard in particular remembered his family involvement with Millwall Football club and the First World War and the appearance of the first motor cars on the road. 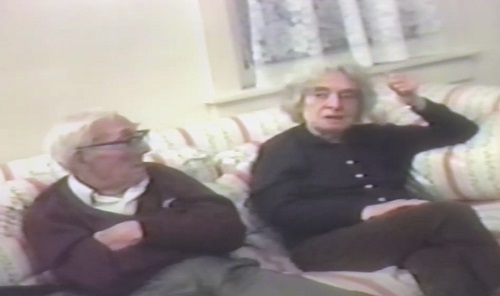 It must be remembered that the early 20th century was a world that generally happened out of doors and in the streets, there was no inside entertainment like television until later in the century. People felt more part of the community because there was constant interaction with your neighbours and people would sit on their doorsteps to keep an eye on their kids and watch the world go.

A very topical subject in the interviews were telephones, Richard and Ada did not know anyone who had a telephone in their house during their childhood and finding a phone and knowing how to use it was a major undertaking if there was an emergency. Generally if you needed a doctor or a policeman quickly, you had to send someone to fetch them.

The videos are a fascinating and entertaining insight into a world long gone and illustrates how listening to memories of the older generation you can learn about what really mattered to people which often gets overlooked in history books.

Many thanks to David and Louise for sending the links, which are listed

If you would like a copy of David’s  book, visit Amazon here