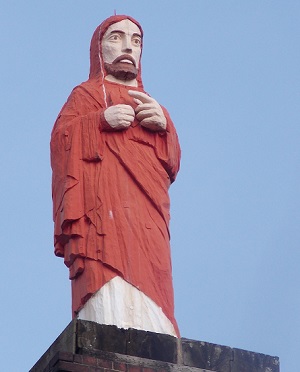 When I am travelling  past Limehouse station on the DLR , I am always fascinated by the statue of Jesus stuck aloft a tall chimney. Nobody else ever seems to take much notice but I always wondered how  this particular Limehouse landmark came about.

The chimney or tower belongs to the Our Lady Immaculate and St Frederick that looks out upon  Commercial Road.

The church’s origins lay in a mission founded in 1881 to serve the large Irish population that lived in the Limehouse area at the time. Using rooms around Limehouse  initially , the mission progressed to a temporary church until a more permanent church was planned in 1925.  However lack of finances delayed the project and it was left to the mission priest to supervise the five skilled workman and volunteers until they completed the church in 1934.

Whilst the church itself is quite traditional it does have number of features externally which are quite unusual.

The chimney like tower supports the ” Christ the Steersman ” or  “the Steering Christ” , it was designed to be seen from the Limehouse Basin and from the Thames and even considering the amount of development if you know where to look you can see still see the statue.

The statue’s curious design is supposed to be similar to  a ship’s figurehead and reflect Limehouse’s connection to the river and the Sea.

The north of the church has a small niche which contains a statue of the Virgin Mary and a clock, but in front of the church is a striking Cross showing Christ Crucified. The sculpture has a front and back view and was made in a local foundry.

On the west of the church halfway up the wall is a fibreglass sculpture of Our Lady with the Christ Child. 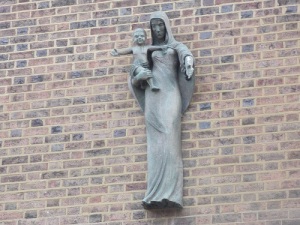 Once you know where the statue of ” the Steering Christ” is, it offers a reassuring presence as you wander the streets of Limehouse.  And if you are travelling on the DLR , try to spot it when you pass Limehouse station.