Like many people during lockdown, I kept very much to my local area and did not do my usual wanderings around the Island. However with Canary Wharf in easy walking distance, I decided to have a wander around the large estate. 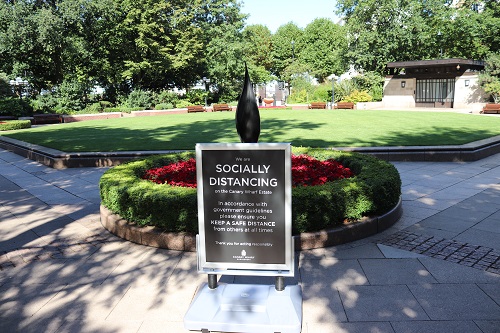 On the surface, little seems to have changed with gardeners tending the green areas and contractors working on the many building projects but what you begin to realise is that there are very few office workers and most of the people wandering about are wearing masks. The once bustling financial district which used to welcome over 120,000 workers each day is much emptier with estimates of less than 10,000 workers returning to their offices.

One noticeable change has been the often packed tube station is much quieter with the crowds now slowed to a trickle. 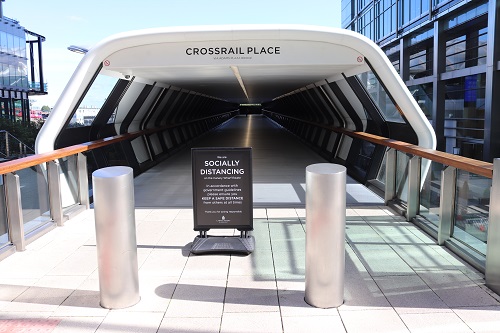 Many of the large banks and businesses seem in no hurry to get the thousands of workers back into Canary Wharf to their offices. To encourage workers to return, The Canary Wharf group has installed signs and created a one-way system for pedestrians, it is also regularly cleaning public areas and will manage the towers’ lifts to ensure social distancing. However, despite these measures, employers and employees show little urgency to return to their offices after several months of working from home.

One of the major problems is that the vast majority of people commute to the area using public transport, and many workers remain uneasy about being stuck in a crowded tube.

Walking around Canary Wharf, another realisation is that the many small businesses which rely on office workers are struggling with few or no customers. In pre-pandemic times there would be hundreds of people per day queuing for coffee or fast food, now it is just one or two. 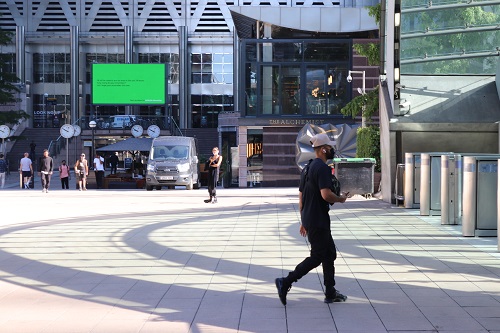 Is this the end of Canary Wharf as we used to know it ? 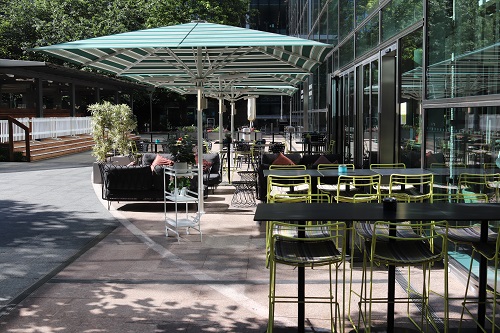 One worry for the small businesses is that the thousands of office workers will never return in large numbers because of changing working patterns. Just a few months ago, Canary Wharf was looking forward to extending the estate with many new buildings and Crossrail poised to deal with the proposed increase in workers. Those plans now seem more than optimistic and the next few months will show if there is a market for office space or not.

The initial signs are not good, Morgan Stanley is said to be reviewing their London requirements, Credit Suisse is giving up some office space and Barclays is considering its headquarters altogether. 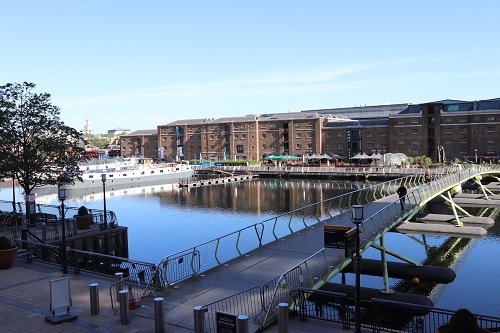 However, there is some people that suggest that even if the huge landmark office buildings are slowly being emptied, Canary Wharf could become the world’s biggest technology hub.

Over the years writing for Isle of Dogs Life, it has always surprised me how often history repeats itself. The docks were seen as an integral part of London but their time came and went. No area is safe from world events and Canary Wharf is probably facing its biggest challenge since it was raised from the ashes of the West India Docks.

Tunnel: The Archaeology of Crossrail at the Museum of London Docklands from 10th February to 3rd September 2017

Regular readers will know that I am often intrigued by tunnels and have written about the Thames and Blackwall tunnels. Therefore it was with a great deal of anticipation that I attended the preview for the latest exhibition at the  Museum of London Docklands. The exhibition is entitled Tunnel: The Archaeology of Crossrail and explores the wide range of archaeological objects unearthed by Crossrail .

Many people may be aware of Crossrail, Europe’s largest infrastructure project, but few people will realise that since work began in 2009, the project has undertaken one of the most extensive archaeological programmes ever in the UK, with over 10,000 artefacts found covering almost every important period of the Capital’s history. 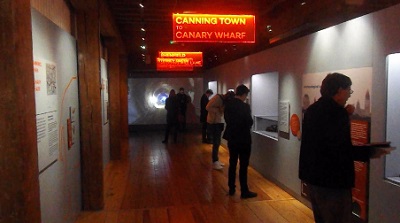 The construction of London’s newest railway, which will be known as the Elizabeth Line has sliced through London from East to West and gone through many layers of London’s history.

Some of the finds include:

Human remains including one of the skeletons found near Liverpool Street Station from the 17th century Bedlam cemetery, which a DNA has shown died from the Plague. 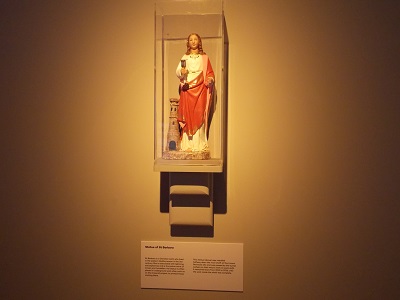 Just before you enter the main part of the exhibition, there is a statue of St Barbara who is associated with explosives and lightning. She is the patron saint of miners and tunnellers and despite all the high tech equipment, the people on the Crossrail construction took the statue down one of the shafts for good luck.

The exhibition follows the trail of the Elizabeth Line and features highlights from each section. Of particular interest in our local area were the digs at Pudding Mill Lane that looked at some of the old industries on the River Lea, The old Thames Ironworks site near Canning Town was explored and a number of finds like iron chains and brickworks was found. 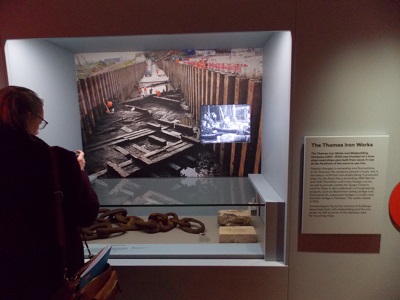 Digging under Canary Wharf, part of a woolly mammoth’s jaw bone was found and a fragment of amber that was estimated to be 55 million years old. Both items are currently being analysed at the Natural History Museum.

Some objects at Stepney Green are from the Tudor period when it was the location of many large mansions for the wealthy.

The exhibition illustrates some of the problems of archaeology with the mystery of the Walbrook skulls which are from different periods but were all found together.

As well as the archaeological finds, large screens show how the massive engineering project of Crossrail burrowed its way beneath the London city streets and beyond.

This fascinating exhibition is without doubt one of the biggest and most comprehensive exhibitions held at the Museum of Docklands and is well worth a visit. The exhibition is free and runs until September 2017.

The glass DLR Bridge at Poplar station may seem an unusual location for an art exhibition but in many ways it represents a unique connection between Poplar and Canary Wharf.  The artwork was created by the SPLASH Arts (South Poplar and Limehouse Action for Secure Housing) Team led by David Bratby who  worked with over 350 adults and children across the local Community in Poplar, Tower Hamlets College, Crossrail and Canary Wharf to develop the new art installation.

Artists Karine Gullino, Laura Napier and Anita Ellis facilitated sessions whilst Wylfried Tondelier brought all the pieces together to create the final exhibition which highlights the Docklands strong maritime heritage.  The East India Company were based in Blackwall and  established a chapel on Poplar High Street 360 years ago.

The historical trade routes created by the company connected many parts of the world and much of the artwork reflect the ships, cargoes and the people. One of the remarkable aspects of this part of docklands is that it has developed connections with all parts of the world for centuries which led to a global outlook and attracted people from all around the world.

One of the aims  of the project is to connect the four communities of Poplar High Street, Tower Hamlets College, Canary Wharf and Crossrail.  In many ways the creation of Aspen Way roadway cut off Poplar from the Docks area which it had always been associated with. The creation of the DLR  reconnected the transport links between Poplar and the West India Docks and the Glass Bridge footbridge provided the ability to walk across from Poplar to Canary Wharf. 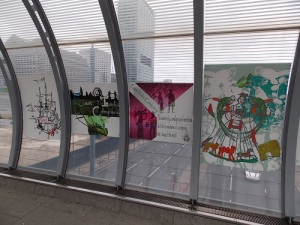 The Changing Face of Canary Wharf ? The Wood Wharf Development

An artist impression of Wood Wharf

Regular readers will know that I often take an interest in the plans to build  major developments in Canary Wharf and on the Isle of Dogs.  I tend to be  quite sceptical when I see artists impressions of massive tower blocks because the history of Canary Wharf and other areas suggest that the buildings do not always get developed due to a multitude of reasons. The  Riverside development at Westferry Circus is a good recent example of grandiose schemes that hit  problems and are mothballed often for years.

However  the news of the Wood Wharf project being approved by Tower Hamlets council  is perhaps more significant  because the plans for more than 3,000 homes to be built is supported by the Canary Wharf Group and would represent the first extension to the financial district since the 2008.

The green bits illustrate much of the Wood Wharf development

The building will be a mixture of residential and business with its centrepiece being a 211-metre 57-storey  residential skyscraper facing the  South Dock.

25% of the housing stock is earmarked as affordable housing with proposed new primary school, health facility and a library.

The creation of a mainly low-level mixed use area is a move away from the usual business orientated Canary Wharf Group and represents an effort to promote Canary Wharf as a place to live as well as work.

This attempt to diversify is probably sensible due to the large number of large building offering office space both in Canary Wharf and the City of London. The booming property market is another factor with Canary Wharf looking at the luxury end of the market.

It is expected some of the buildings will be completed at the  same time as the arrival of Crossrail in 2018.

More than 100,000 people commute into Canary Wharf every day and it has been estimated that could double in ten years.

What all this means for rest of the Isle of Dogs is unclear, will the Wood Wharf development reduce the amount of development on the Island ? or will it increase it  with developers cashing in on the arrival of Crossrail. Either way it will be an interesting development to follow in the next few years.