The Story of Ernie’s Snack Bar 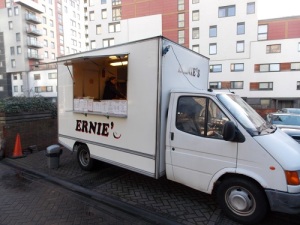 Tucked away behind some offices off Marsh Wall is a small white van dispensing food and drink to the office and construction workers. 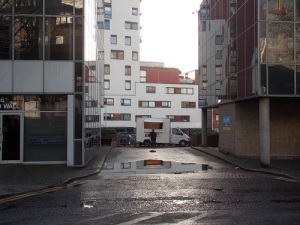 The van is located opposite the gleaming skyscrapers of Canary Wharf and few would realise the connection between the two.

Remarkably Ernie Bennett who began Ernie’s Snack Bar was  Canary Wharf’s first retailer, When Olympia and York started the Canary Wharf development, there was virtually no catering facilities nearby for refreshments.  So Ernie moved his burger van to  a pitch at Westferry Circus, and soon became a favourite with the construction workers providing tea and food.

However it was not just the construction workers, in the early days of the London marathon, around the top of the course there were few catering outlets. The developers asked Ernie to pitch his van just off Cabot Square.

Ernie ‘s catering career started in the docks just after the war when he would provide tea for the dockers, however he then got a  job  with a clothing firm in the city for the next 30 years.

In 1984,  Ernie  was made redundant and to fill his time he started the Isle of Dogs Angling Society and began to use his caravan to make cups of tea for the members.  Gradually he  had the idea of a burger van.  He was quoted in a local newspaper  saying  ” so here I am, back where I started, selling tea.”
Although his original van was destroyed in a fire , that did not deter Ernie who bought a new one.

From the Canary Wharf News 1991

Ernie was born in the Isle of Dogs and his family had lived on the Island since 1863, he was always proud of this heritage and in the windows of the new van he had pictures of the Island . 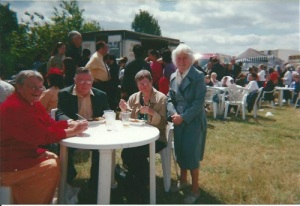 From a number of pitches around the Island, Ernie’s Snack Bar  became a familiar sight , Ernie and his wife Doreen sold food and drink and built up a loyal following. When Ernie passed away in the 1990s , Doreen and other members of the family have carried on the business.

So if you are passing down Marsh Wall, you will most days see Ernie’s and Doreen’s daughter Sharon  busy serving customers who little realise the intriguing history  of Ernie’s Snack Bar.

Many thanks to Sharon and Michael Bennett for the further information and the permission to use some of the photographs.