A two day family festival at the Museum of London Docklands is a reminder of an unusual London tradition that took place on the frozen surface of the Thames.  London’s frost fairs took place for over two centuries when Londoners would descend on the frozen River Thames to build markets, play games and sell all manner of food and drink. 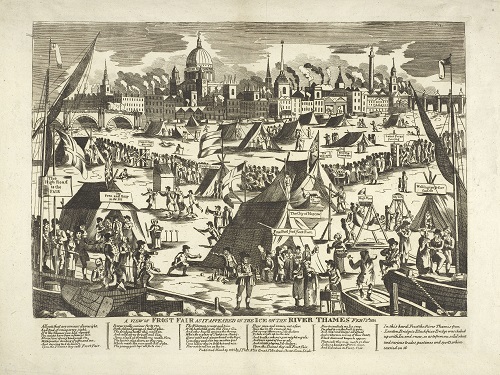 It was only rarely that the conditions would allow these carnivals to happen, between 1564 and 1814 there were around seven frost fairs in total but the festival of 1814 would be the last and one of the grandest. The construction of the new London Bridge in 1831, and development of the river and embankment during the Victorian era bought an end to this tradition.

The tradition may have died but the memories of these festivals are still alive and the Museum of London Docklands hopes to create some of the excitement with its free family festival with the Telegraph Community choir and Newham Super Choir performing a number of festive songs.

Visitors will also be able to enjoy talks, an Under 5s festive music session or try their hand at a range of arts and crafts. From making a pop-up frost fair card and a paper yule wreath, to hand puppet crafting and snow globe making, this is a festive experience for all the family.

So if you want to celebrate a long gone London tradition and entertain the children, why not make your way to the Museum of London Docklands on the weekend before Christmas.