Once again many thanks to Eric Pemberton for this fascinating series of postcards from the early 20th Century.

Victoria Park is a large park originally laid out by architect Sir James Pennethome between 1842 and 1846, previous to being a park the area was known as Bonner Fields named after Bishop Bonner , the Lord of the Manor of Stepney.

The park was opened to the public in 1845 and quickly became a vital piece of greenery amongst an overcrowded East End.

It quickly became an important  meeting place for political and other meetings.

It is also the site of  two pedestrian alcoves  which taken from the old London Bridge which was demolished  in 1831. 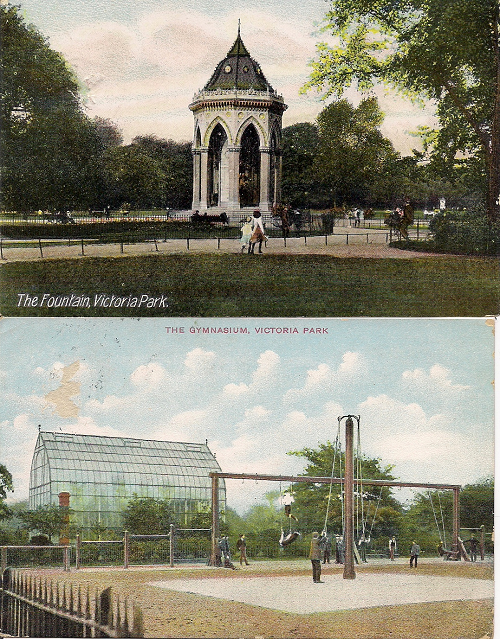 The drinking fountain was donated by Baroness Burdett- Coutts in 1862.

From the early days of the park there was a large number of amenities which included Lakes, cricket grounds and athletic areas such as the Gymnasium.

St James the Less was built in 1842, was damaged in the Second World War.

Thomas  Parmiter was a wealthy Silk Merchant in East London  in the 17th Century who left funds for a school in Bethnal Green. The School grew on a number of sites until the 1970s when the Parmiter School relocated to Hertfordshire.

Part of one of the Parmiter school buildings was taken over by Raine’s Foundation School.