Tony recalls the time when barges became a regular sight going up and down the Thames with waste for Mucking Marshes which was a major landfill site servicing London, it was one of the largest landfills in Western Europe and had been filled for decades with waste.

Tony found working on the river was hard work but not without its lighter moments especially if the police were involved. However, Tony was not laughing too much when he was making his way under London Bridge, the taking down of old London Bridge and the building of a new London Bridge in the 1960s and 1970s caused a certain amount of disruption on the river and caused particular problems to the tugs with heavy barges.

Recruit, Touchstone, Swiftstone, were tugs that I worked on during the 60-70s, then I was bosun at Feathers Rubbish Wharf in Wandsworth for 6 yrs loading rubbish, sheeting up and moving 200 – tonne barges at high water that were then towed down the Thames to Mucking for discharging on the marshes. The marshes were owned by a firm called Surridge, who I was told purchased the Mucking marshes in Victorian times for £25 an acre then allowed London’s rubbish to be dumped there at a cost of course. I believe they also had barges that transported rubbish to the Medway as well as bringing bricks back from the brick works in the Medway to London.

One day, all of a sudden, a number of  police cars with bells clanging (this shows my age!!) came flying up the wharf and there were police everywhere. It turned out that a  prisoner had escaped from Wandsworth prison in the back of a rubbish lorry. The lorry had already tipped its 6 tonne load into the pits. They stopped the crane grabbing anymore rubbish out of the pit and  then a mini–bus arrived full of more police and cadets who proceeded with rakes to get in the pit and sift through and turn over the smelly rubbish. The lorry had been to Roehampton Limb Centre first and loaded unwanted old false limbs before its last pickup at the prison, every time they came across an arm or leg they thought they had found the prisoner. We stood there laughing, even more so when we found out that the prisoner had jumped out of the lorry as it came into the wharf picked up an old mac, stole a dustman’s bike and ridden off into the sunset so to speak.

I was holiday relief on many of Cory’s Tugs, the Regard which was the jetty tug at the Albert Dock towing loaded coal barges across the river to the barge roads on the south side. Now and again we would tow a barge loaded with ripe bananas from the ship in the Victoria dock. If some of the banana’s were ripe when unloading they were no good for market so around 20 to 30 tonnes were dumped in our barge and towed to land-fill at Mucking with our other rubbish craft. Not liking waste, we often used to all take a stalk of bananas home.

One day on the way home in my little 1935 Austin Seven Ruby saloon, our skipper Tom was in the back with 3-4 stalks of bananas sitting beside him. We were pulled over by a policeman in Shooters Hill Rd (in those days policemen could safely step in the road put one hand up to stop you). Tom, the skipper had just lit up his stinking pipe so when I wound my window down and the copper popped his head in to ask where we had been, all he got was a great cloud of Toms smoke wafting in his face. He quickly spluttered “ OK on your way “. When we looked round at Tom in the back he was sitting there with a big smile and his Trilby hat perched on a stalk of bananas, technically we were in fact stealing even though they were being dumped.

In the 1970s, the old London Bridge was being dismantled and the contractors sheet piled caissons around the old arch abutments which narrowed the gap that we had to tow through, making it much smaller coming down on the spring ebb tide. With six 200 ton barges behind us, it was very challenging, we would put lighterman and spare breast ropes out on the barges as we approached the bridge . 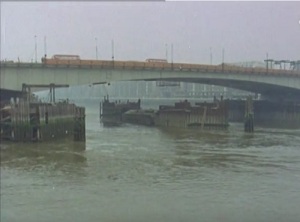 As you came through the arch, the water would drop like a step and spit you out like a cork out of a bottle. Once committed there was no turning back, no brakes !!! Breast ropes would snap and for a few seconds you had no control and all you could do is hang on, miss the Belfast and shape up for Tower Bridge. Once you got through, everyone would breathe a sigh of relief, you would get your hands back on the tug and carry on down river. We  all generally agreed that going through London Bridge was more than enough excitement for one day.