Today all over the Country and indeed all over the World, people will remember the members of the armed forces who have died in the line of duty.

Thousands will pay homage at the high-profile events at the Cenotaph, however the Isle of Dogs is unusual for having very few War Monuments, many of the ones remembering the First World War were  destroyed in the Blitz . 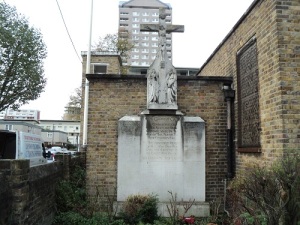 A rare survivor is the Cross and Monument standing in front of St Luke’s Church in Stafford Street in Millwall.

The Cross and the list of names to the fallen in the First World War  has survived, however the rest of the original church it was attached to was badly damaged in the Second World War and was eventually demolished in 1960. Since then the church has carried on with a make-shift chapel, tacked on to the church hall. 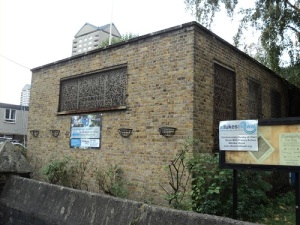 Although the appearance of the church is run down, it is a measure of how important the monument is to the church  and local people that it was saved from being destroyed. 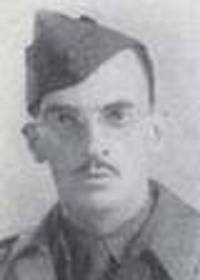 Next to the memorial is a plaque which remembers  a Lt Roland Dowlen a former Scoutmaster at the Church whose death  in  a concentration camp in Germany is the tragic end to a remarkable story. 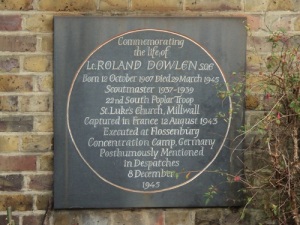 Roland was born in Sicily in 1907 , his mother was American and his father Italian.

He went to work for Royal Bank of Canada in Paris in 1923 before being transferred to the London branch of the Bank in 1933. In 1936 he became a naturalised British subject, soon afterwards in 1937 he became first Scoutmaster of the 22nd South Poplar Scouts Troop based at St Luke’s Church. For the next two years he becomes a popular figure amongst the many scouts he trained.

However it is the advent of the second world war that transformed the Bankworker/Scoutmaster  into a Radio operator working for the top secret (SOE) Special Operations Executive.

The SOE was officially formed in 1940, to conduct espionage, sabotage and reconnaissance in occupied Europe against the Axis powers, and to aid local resistance movements.

Roland enlisted in the Army in 1941 and volunteered for the SOE, he had particular skills the SOE were looking for, namely speaking fluent French and experience of living in France for a long period. He was also methodical and calm under pressure.

After training as a radio operator he was flown into France in 1943 to work with what was known as the Chestnut network. The three main SOE agents in the network were former racing car drivers who had contacts with many influential people in France. It was messages from these agents that Roland was to relay. This work was extremely dangerous and many radio operators were caught and killed quickly due to the fact that the Germans had their own Direction Finding teams who traced the source of the radio signals.

Considering that the average life of a Radio operator in the field was six weeks, Roland exceeded expectations by surviving five months before being caught by the Gestapo in August 1943.

Over the next 18 months he was moved around France and Germany, due to his role in the SOE he would have been mistreated and probably tortured to get information from him.

Eventually he ended up in Flossenberg concentration camp where just two weeks before it was liberated by the Americans he was executed by hanging.

His sacrifice was acknowledged by the British Army who gave him a mention in Despatches and by the French where his name is on Valencay Memorial. The Valençay SOE Memorial is a monument to the members of the Special Operations Executive F Section who lost their lives for the liberation of France.

“This officer was landed in France by Lysander on the 18th March 1943 as W/T operator to a circuit in the Paris area. He worked for five months in this difficult region, and sent 39 messages to London. He was arrested by the Gestapo on the 12th August 1943, and spent over 18 months in captivity in France and Germany, during which time he suffered great hardships and severe treatment. He was executed on the 29th March 1945 in Flossenberg concentration camp.

For his bravery and self-sacrifice, it is recommended that Lieut. Dowlen be awarded a posthumous Mention in Despatches. 8th December 1945.”

Remembrance Day is a reminder that ordinary people like Roland did extraordinary tasks but  paid the ultimate sacrifice to defend their country.

In the next few years the present St Luke’s Church will be transformed into a new church on the same site with the monument cleaned and relocated .