It has been a very quiet year for boats visiting West India Dock but we have the arrival of a regular visitor over the years. The Super Yacht Kismet was last here in 2019 before the pandemic.

Kismet is a large superyacht and has visited the dock a couple of times before in 2014 and 2016. It often comes to London when its owner Pakistani-American billionaire businessman Shahid Khan wants to entertain guests attending NFL matches in London. His NFL team Jacksonville Jaguars play Maimi Dolphins at Tottenham Hotspur Stadium on the 17th October 2019.

The yacht is often tucked away at the bottom of the dock for some time before being taken up to near Tower Bridge for entertaining guests.

Kismet is 308ft long has three decks and a private sundeck with a pool-Jacuzzi-BBQ area and all mod cons. The ship features exterior styling by Espen and interior design by Reymond Langton Design featuring marble and rare woods, it will accommodate 12 guests in six staterooms, and has a crew of 20.

This ship is the second vessel named Kismet owned by Mr Khan and estimated to have cost 200 million dollars, a previous 223ft yacht was sold for a rumoured £70 million in 2013. The new Kismet was built at German boatyard Lurssen.

Unusually for the secretive super yacht world, a great deal seems to be known about Kismet and it was rumoured in 2019 that the yacht was up for sale.

The Ilona superyacht has been berthed in West India Dock since August and today she is joined by the superyacht “Lady S”. Estimated to have cost 70 million dollars, the 225-foot long vessel is owned by Daniel Snyder, an American billionaire best known as the owner of the Washington Redskins American football team. The Washington Redskins play in London at the end of October which may be the purpose for the visit. 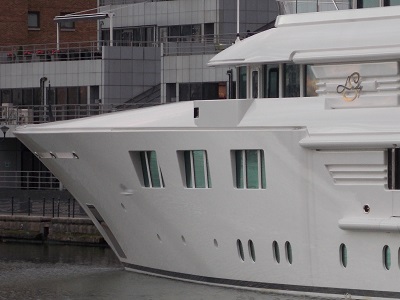 Interestingly, the Kismet superyacht owned by Shahid Khan owner of the Jacksonville Jaguars was berthed in the West India Dock recently. 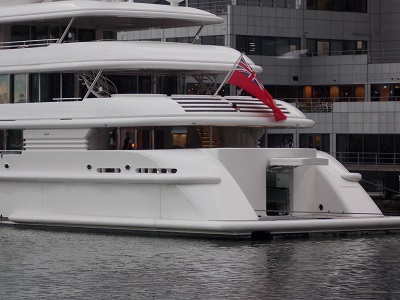 The yacht was built by famous Dutch company Amels in 2006 as Lady Anne P.B. before being sold  to Mr Snyder who renamed her “Lady S.”

The 224.74ft /68.5m yacht ‘Lady S’ was designed by Walter Franchini and refitted in 2013 , she can provide accommodation for up to 12 guests in 7 rooms, including a master suite, 1 VIP stateroom, 3 double cabins and can carrying up to 19 crew on board.

Like many of the large luxury yachts, it has all the latest amenities including Gym, Air Conditioning, Lift,  Deck Jacuzzi and Stabilizers.

It is not known how long the yacht will be in West India Dock or its destination after it leaves.