The Story of Ariel’s Girdle and the Millwall Extension Railway 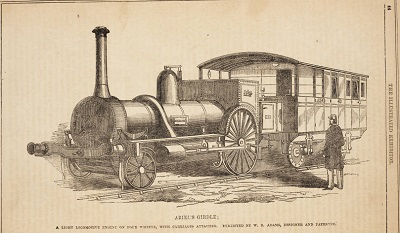 Recently, I was explaining how the postcards and pictures sent to the site by Eric Pemberton often leads to unusual lines of research.

To illustrate this point, Eric send a couple of pictures of steam locomotives at stations on the Island in the 19th century. You may think nothing  unusual about that, however one of the locomotives had a quite prestigious history which included being on show at the Great Exhibition of 1851. 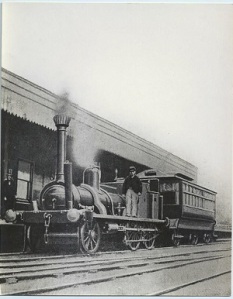 The exhibition catalogue  of 1851 gives us the details of the locomotive.

Light locomotive engine for railways, named “Ariel’s Girdle,” on four wheels, coupled to a four-wheeled composite tender; it makes a steady eight-wheeled machine, capable of lateral flexure for sharp curves. The tender contains water beneath the floor, and has a sledge break of peculiar construction, acting with friction on the rails to save the wheels. its handle being within reach of the driver.

Eight-wheeled double railway carriage for first and second-class passengers. The wheels are left free to move laterally by means of swinging links and shackles, which enable the carriage to run round curves of 250 feet radius. A sledge break of peculiar construction is suspended from this carriage. The locomotive engine produced at the Airedale Foundry, Leeds, by  Kitson, Thompson, and Hewitson; the carriage portion produced at Birmingham by  Brown and Marshall.

A spring for the locomotive engine, formed of patent ribbed steel; the rib, working in a corresponding hollow of the adjoining plate, reduces the friction and preserves the parallelism of the plates.

How Ariel’s Girdle went from Great Exhibition to the Millwall Extension railway is a bit of a mystery but three years after the photograph was taken, the engine was scrapped. 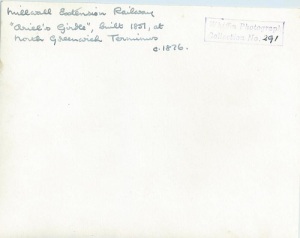 The other locomotive on the South Dock is a four wheels coupled tank, No 3. 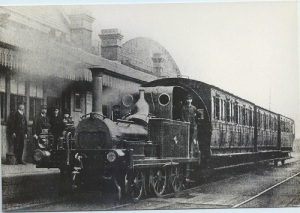 We know much less about this locomotive, however it does illustrate  how these  small locomotives  were used on the line. 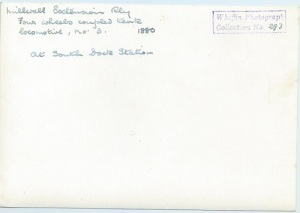 One mystery still to be solved is the photographs themselves, although clearly stamped as Whiffen Photograph Collection, the dates on the back would confirm they were not taken by the famous William Whiffen, the Poplar photographer who was born in 1878 but possibly taken by his photographer father also called William who was born in 1851 and died in 1937.

Although the locomotives are interesting, the Millwall Extension Railway has a story of its own.

In 1863, the London and Blackwall Railway Company proposed a line down the middle of the Isle of Dogs from a junction at Limehouse. However the proposed line was vigorously opposed by the East and West India Dock Company and rejected by Parliament in 1864 because it was considered it would be adverse to business and a fire risk to the many ships in the dock.
Eventually the dock companies agreed to compromise and allow a Millwall Extension Railway  and allow light engines on a route from Millwall Junction to South Dock, then Millwall Docks ending at North Greenwich to enable passengers to catch the ferry to Greenwich. The terminus was actually in Cubitt Town and the use of North Greenwich seemed to be only used to make it seem a little bit more upmarket.

A full passenger service began in 1872,  the line also had a freight and a workmen’s service.
Initially steam trains were not allowed to power themselves through the docks and tram cars were horse drawn between Millwall Junction and Millwall Docks from where a steam locomotive pulled carriages to the terminus at North Greenwich.

Full steam haulage on the branch only started in 1880, for a variety of reasons, the line was never very popular with passengers except when Millwall Rovers Football club were playing at home. During WW1 the service was reduced with many of the passengers using the local bus service. Passenger services eventually closed in 1926, freight traffic continued until 1927.

Although the Millwall Extension Railway  was closed, when the DLR  developed it used much of the old railway line.  The Island Gardens branch turned south at Poplar before running through the Canary Wharf  down to South Quay and then to Crossharbour which was close to the site of the old Millwall Docks Station and then it followed the course of the Millwall Extension Railway across the Millwall viaduct to Island Gardens which was built roughly on the site of the former North Greenwich terminus.

Although not used now,  Millwall Viaduct  is the only remaining evidence of the Millwall Extension Railway. 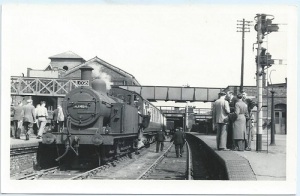 Millwall Junction carried on being used into the late 20th century , The station buildings were demolished in 1965 but the platforms remained into the 1980’s and were finally removed during the construction of the Docklands Light Railway.