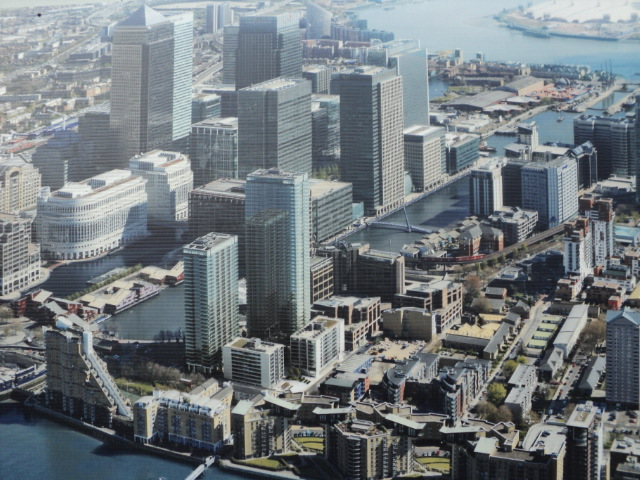 In a part of London with a long and varied history , it will be quite surprising to many people that Canary Wharf itself has a recent and humble history.

Canary Wharf  takes its name from No. 32 berth of the West Wood Quay of the Import Dock. This was built in 1936 for Fruit Lines Ltd, a subsidiary of Fred Olsen who from the 1920s got involved in the Mediterranean and Canary Islands  for the  fruit trade. It was Fruit Lines Ltd  request, that the quay and warehouse were given the name Canary Wharf.

The Canary Wharf warehouse survived the Blitz with only minor damage but the Fruit Lines Limited moved to a new Fred Olsen Lines facility at the Millwall Docks in 1970 . The original warehouse  itself was demolished in 1986.

From these humble beginnings  the new developments of the 1980s and 1990s of the old docks began to refered to as Canary Wharf until it achieved national and international recognition.

By a bizarre coincidence the Canary Islands themselves are known in Latin as Canariae Insulae which translates as Island of Dogs.

By isleofdogslife in Human Life on February 12, 2013.
← Isle of Dogs by Tigercats The Birth of Colossus – The Story of Tommy Flowers →