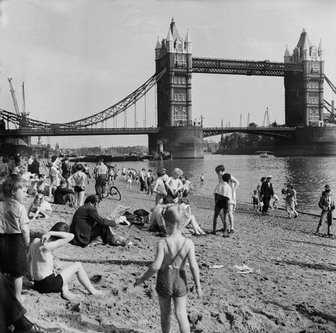 One of my favourite walks is from the Isle of Dogs to the Tower of London, it is a walk  that offers plenty of Docklands history.

The Tower of London is often surrounded by visitors from all over the world, it is especially popular at the moment with the added attraction of the ceramic poppies installation. 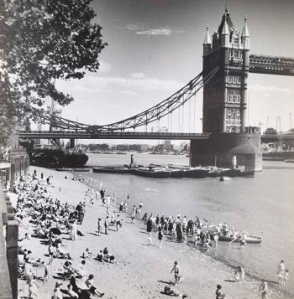 However few people would realise that between the 1930s and 1970s , it was still a very popular spot but not only for the Tower but also for its beach.

People had walked on the Thames foreshore for thousands of years but Tower Beach as it was known  was created by bringing 1,500 barge loads of sand to the site. 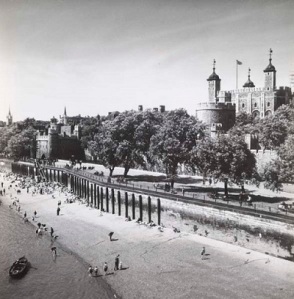 In 1934, Tower Beach was officially opened , King George V decreed that the beach was to be used by the children of London, and that they should be given “free access forever”.

It was such a success in the 1930s , that it was estimated half a million people had used the beach. 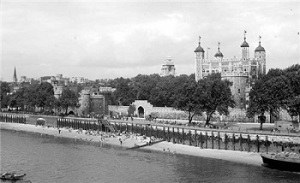 A news paper report from 1934  gives us more details

First, and to most people, most interesting, is the new “lido” on the Thames by Tower Hill. The strip of foreshore, which is uncovered to some width at low tide, has had its shingly surface improved by the addition of sand. A boatman is posted on duty to see that venturesome children do not get themselves into danger, and thousands of boys and girls whose homes are in drab grey buildings clustered at the south of Tower Bridge and London Bridge, are spending happy holiday hours at play there. Even the authorities have been taken by surprise at the new Lido’s popularity. When it was opened a few weeks ago they expected that 500 children a day would visit it. But there were 5,000 a day from the beginning, and considerably more since the summer holidays started.

For the many East End children who had never been to the seaside , this was a great substitute and thousands flocked there especially from Stepney and Poplar.

In many ways it was just like the seaside, you could hire a deck chair and watch the children build their sandcastles, have a paddle, go and buy an ice cream or watch the many entertainers. 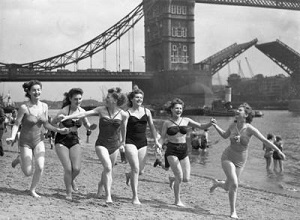 If you wanted to brush up on your history  you could wander into the Tower itself which was free for children. 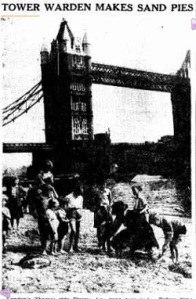 A newspaper picture of the beach reopening in 1946

Although Tower Beach was closed during the war ,  normal business resumed in 1946 and was still popular in the 1950s and 1960s. However in the 1970s there were concerns about the pollution in the river and the beach officially closed in 1971.

The Tower today, no seaside but a sea of poppies

Do not forget that if you are a Tower Hamlets resident you can visit the Tower of London for only £1 , for more details visit the Idea website here

By isleofdogslife in Human Life on August 21, 2014.
← Remembering the City Canal – The Story of the Limehouse Lock Entrance The unveiling of the War Memorial Plaque in Island Gardens →