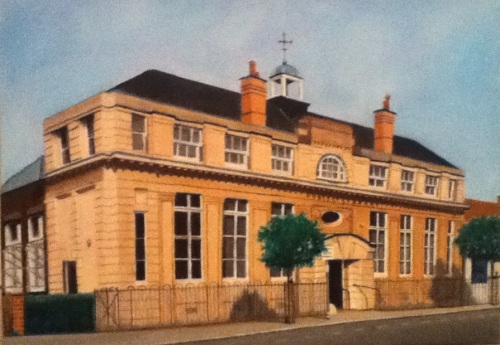 Recently I have been sent a picture painted by talented young local artist, Rebecca Mitchell of one of my favourite buildings on the ‘Island’, the Cubitt Town Carnegie Library on Strattondale Street.

In a previous post I gave a little bit of the history of the library and told the story of the book ‘Rose-Marie’ that was returned after being overdue for 70 years.

However it is important to realise that the library is of national and international significance being part of a the chain of Carnegie Libraries. Carnegie Libraries were built with money donated by Scottish-American philanthropist Andrew Carnegie, it is estimated that 2509 libraries were built between 1883 and 1929. The majority (1,689) were built-in the United States, but 660 were built-in Britain and Ireland, 125 in Canada and others in Australia, New Zealand, Serbia, the Caribbean, Mauritius and Fiji.

Cubitt Town library, one of the 660 in Britain and Ireland was part of a movement that developed what we consider the modern library. One of the innovations of the libraries was the idea of open stacks that encouraged people to browse and choose books for themselves.

A Poplar Guide of 1927 relates with pride “The Cubitt Town Free Library, opened in January, 1905, in Strattondale Street, is on the ‘Open Access’ system, by which means borrowers can select their own volumes from the shelves with full satisfaction to themselves and a saving of time to all concerned: the library is open from 9 a.m. to 9.30 p.m.”

Before Carnegie libraries, in most libraries you went to the Librarian at the counter and ask for books which were then retrieved from closed stacks.

It cannot be overestimated the role that libraries played in the late 19th and 20th centuries especially in poorer areas, they provided escapism and a refuge from the often harsh world outside.

However in the 21st century a number of Carnegie Libraries have been demolished or used for other purposes, this has led to many libraries widening their access to provide more community services. Cubitt Town has developed a number of special and community events so hopefully for many years to come the library will go from strength to strength. 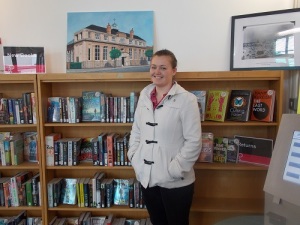 Rebecca in the Library 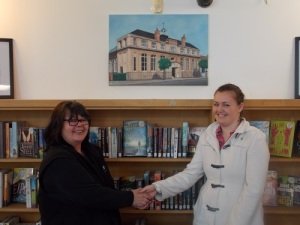 Cubitt Town Carnegie Library and the Story of Rosemarie

By isleofdogslife in Human Life on February 4, 2014.
← Eric Pemberton’s Postcards – Island Gardens and Isle of Dogs Memories of the Isle of Dogs, Part Two – David Carpenter →